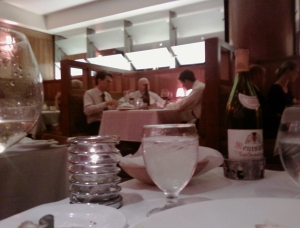 Susan Feinberg, an associate professor of management and global business at Rutgers University, caused a stir in the left-wing blogosphere over the weekend with her account of witnessing House Budget Committee chairman Paul Ryan drinking a glass of $350-a-bottle wine at an upscale restaurant near the Capitol. (Feinberg, who was at the restaurant, Bistro Bis, with her husband to celebrate her birthday, knew the wine was pricey because she could make out the name on the label and checked it on the wine list.) Feinberg confronted Ryan, accusing him of hypocrisy for drinking an expensive wine while advocating reduced spending for Medicare and Medicaid. But she didn’t stop there. Feinberg also suggested Ryan might be guilty of ethics violations, secretly snapped a photo of him and two dinner companions, and then took the “story” to Talking Points Memo, the lefty site which ran a high-profile piece suggesting Ryan might be guilty of some sort of wrongdoing.

On Saturday, I sent Feinberg an email asking a few questions about the incident and about her unhappiness with Ryan. First, the photo she snapped of Ryan and two men sitting a few tables away appeared to be taken from her own table, and on that table was a bottle of wine. (Feinberg told TPM that she and her husband had shared a “bottle of great wine.”) A check of the Bistro Bis wine list — in much the way that Feinberg did at the restaurant — shows that the wine was a Thierry et Pascale Matrot 2005 Meursault, which is $80 per bottle at Bistro Bis. Was that, in fact, Feinberg’s bottle of wine?

I asked Feinberg, an economist, what price constituted outrageous in her mind. Would she have been as upset if Ryan’s wine were $150 a bottle? Or $100 a bottle? Or perhaps $80 a bottle, like her own — which is, after all, more than a day’s labor for a worker making the minimum wage.

Feinberg’s response was brief: “I’m sorry. I have no comment on this.”

This is really a silly controversy. No laws or ethical rules were broken. He wasn’t even doing anything immoral like cheating on his wife.

Is it bad optics?

Sure, a little, but I seriously doubt people will really be that shocked to find out a Republican millionaire has expensive tastes. Democrats are much more vulnerable to charges of financial hypocrisy. In the past two years when she was Speaker of the House Nancy Pelosi racked up over $100,000 for “in-flight services” – including food and liquor – and we picked up the tab for it.

What Feinberg did was a bad precedent though. I was raised to believe that people should mind their own business. Our elected officials and other public servants do have a right to privacy when they are off the clock as Ryan was.

Having the right to do something doesn’t make it the right thing to do.

BTW – I realize photographs can be deceiving as to size and distance, but I can’t help but wonder how Ms. Feinberg was able to read the label on the wine bottle on Ryan’s table. My eyes aren’t that good.

Did she move closer or did she simply recognize the distinctive label? What prompted her to check the price anyway?

This is what I’m talking about:

Did she chew her food thoroughly before she swallowed? Did she chew with her mouth closed? Did she brush and floss afterwards? What brand of shoes was she wearing?

Seriously, who gives a fuck?