If you go carrying pictures of Chairman Mao . . .

Mark your calendars, this is gonna be one of the rare occasions when I disagree with Bob Somerby:

We’ll discuss the coverage of this movement all next week. But the best thing this movement has done is this: It has redefined our political math.

Over the past dozen years, our standard political math has all turned on 50/50. We’re a 50/50, tribal nation—half red and half blue.

The Occupy Wall Street movement has pushed an important new math—99/1, not 50/50. “We are the 99 percent,” they keep saying. Through that accurate reckoning, many people, across all tribal lines, are being told, completely correctly, that they are part of this movement too—that they’re getting ripped off by the one percent, just like everyone else is.

We think it’s smart to stress this instruction, in both the history and the math. As soon as specific proposals are made, tribal walls will start rising again. The plutocrats will use long-established scripts to peel one tribe from the other.

This movement should keep giving people that history. People don’t know how we got to this place. Very few people have taken the time to tell them in a simple clear manner.

Krugman’s history is clear—and important. So is that new American math. We need more of that history, aimed at all tribal groupings, in a movement which heavily buys that new math.

You’re not going to win their hearts and minds saying “Just march and do what we say, STFU and keep your opinions to yourself!” You need to put down YOUR tribal scripts if you expect them to put down theirs.

If the purpose of OWS is to educate people then they need to articulate that. I would have no problem supporting that purpose. But it would mean having a goal and stuff. Right now OWS is all “No goals, no demands, no leaders, no purpose.”

If you don’t define yourself your enemies will do it for you. I haven’t been to any Occupywhatever events, but then again neither has 99% of the country. I don’t watch any network news so virtually everything I know about OWS comes from online sources. Some of those sources are pro-OWS, and some of them are anti-OWS.

Due to the lack of any official coherent message, OWS is being defined by the individuals who are receiving the most attention – the idiots, freaks and nutballs. 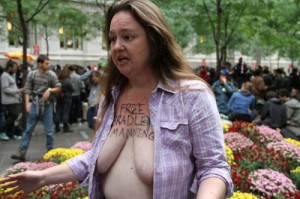 14 Responses to If you go carrying pictures of Chairman Mao . . .