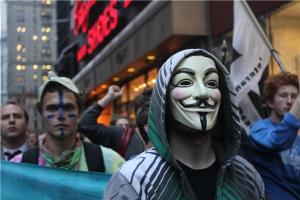 The Coast Guard in Boston confirmed that a woman in uniform was harassed and spat upon near Occupy Boston protesters.

The woman was walking to the train and said protesters spit on her twice, called her foul names and even threw a water bottle at her.

Now, the Coast Guard is warning all staff working on Atlantic Avenue to avoid those protesters while in uniform.

Devon Pendleton, a spokesman for Occupy Boston, doesn’t believe that those male protestors are actually part of the movement. However, Pendleton wants to be clear, that if protestors are responsible for doing something so disrespectful, he’d like to apologize on behalf of Occupy Boston.

Coast Guard official Luke Clayton tells FOX25 whether or not the people who spit on the woman are part of Occupy Boston or not, what happened is against the law and he expects police to protect them against things like this in the future.

More than 140 Occupy Boston protesters were arrested earlier this week for refusing to cooperate with police on the Rose Kennedy Greenway.

The peaceful protestors say the violence wasn’t supposed to happen and a group of anarchists were the ones rebelling. They say they do not condone that type of behavior.

When bad stuff happens OWS will never accept responsibility. If nobody is in charge, nobody is to blame.

This whole “movement” reeks of dude boy entitlement. That’s my personal reason for remaining skeptical. Spitting on a woman in a Coast Guard uniform?? I mean, it’s the Coast Guard for crying out loud. All they do is rescue people. Assholes.

It’s all dudes over there. Almost all white dudes in fact.

Read on FB about several incidents of sexual assault at OWS. Not surprised.

I’ll betcha none of those punks will try spitting on a male Marine.