Karl Marx Would Be Spinning in His Expensive Grave 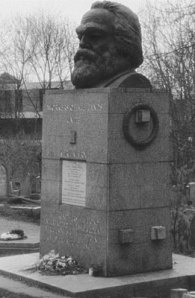 Socialism works great if people accept the basic premise that they can only have what they need and they need to work as much as they can. Then again, the protests on Wall Street are not socialist. They have essentially been ceded land by the NYC government, are watched over by police and get good grub and bathroom access without paying or working for any of it. In fact, they are more like feudal lords. The people contributing to the cause are working for that money and getting nothing of value in return. As undeserved as their income may be, the top 1% are doing some sort of work.

The Occupy wherever follows what I call the faith healer model. Being skeptical of a faith healer shows a lack of faith. If you don’t believe in it, people don’t get healed. Your lack of belief is the problem, not the lack of healing ability. So it goes with the communal government of the Occupiers. Expecting demands and mission statements is your attempt to fit their movement into your hierarchical paradigm. In fact, their lack of any intellectual product is a sign of how much thought is being put into the collective consciousness. Your small mind just thinks they’re sitting around bullshitting in an urban campground.

Human beings are capable of nobility. I haven’t given up on New York City because of the way they came together on September 11. We are capable of great empathy, but the reality is that extraordinary circumstances can only be that way for a limited amount of time. The majority of the year, we are self-interested. We have to be as an aspect of survival. The ones who are interested in their immediate gratification at the expense of others are the problem, and they occur frequently in Zucotti park.

People get all they can eat of the pretty fancy meals served right there in the park. Instead of stealing food, someone stole the food money. Property goes missing. Guys are using tents to pick up women. Some criminals are sexually assaulting women just because they’re trying to sleep there. The lack of a coherent belief system has attracted bigots and conspiracy theorists. Plus, I’m sure 99% of that group isn’t currently doing any kind of work, even looking for a proper bathroom in some cases. From each according to their amenability and to each according to their greed may be the more appropriate mantra.

I'm like a word a day calendar for executive disasters.
View all posts by 1539days →
This entry was posted in Uncategorized. Bookmark the permalink.