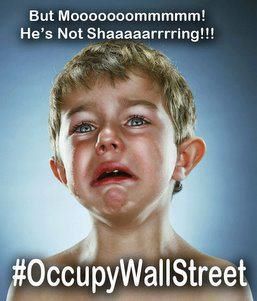 They want $lice of the occu-pie
500G fight at Zuccotti

Even in Zuccotti Park, greed is good.

Occupy Wall Street’s Finance Committee has nearly $500,000 in the bank, and donations continue to pour in — but its reluctance to share the wealth with other protestErs is fraying tempers.

Some drummers — incensed they got no money to replace or safeguard their drums after a midnight vandal destroyed their instruments Wednesday — are threatening to splinter off.

“F–k Finance. I hope Mayor Bloomberg gets an injunction and demands to see the movement’s books. We need to know how much money we really have and where it’s going,” said a frustrated Bryan Smith, 45, who joined OWS in Lower Manhattan nearly three weeks ago from Los Angeles, where he works in TV production.

Smith is a member of the Comfort Working Group — one of about 30 small collectives that have sprung up within OWS. The Comfort group is charged with finding out what basic necessities campers need, like thermal underwear, and then raising money by soliciting donations on the street.

“The other day, I took in $2,000. I kept $650 for my group, and gave the rest to Finance. Then I went to them with a request — so many people need things, and they should not be going without basic comfort items — and I was told to fill out paperwork. Paperwork! Are they the government now?” Smith fumed, even as he cajoled the passing crowd for more cash.

The Finance Committee dives on whatever dollars are raised by all the OWS working groups, said Smith, and doesn’t give it back.

The New World Order is sounding a lot like the old one.

They criticize the old world without offering any solutions.

And people wonder why I mock them.

Don’t get me wrong – I don’t think the old world (the one the rest of the 99% live in) is perfect. There are lots of problems that need fixing, including the corrupt influence that Wall Street has on politics.

But OWS is not the solution.

23 Responses to Money changes everything