President Barack Obama goes into the 2012 with a weak economy that may doom his reelection. But he has one asset that hasn’t received much attention: He’s honest.

The sight of Texas Governor Rick Perry tumbling out of the clown car recently as a “birther” (or at least a birther- enabler) is a sign of weakness, not just for the Perry campaign but for the whole Republican effort to tarnish the president’s character.

Although it’s possible that the Solyndra LLC story will become a classic feeding frenzy, don’t bet on it. Providing $535 million in loan guarantees to a solar-panel maker that goes bankrupt was dumb, but so far not criminal or even unethical on the part of the administration. These kinds of stories are unlikely to derail Obama in 2012. If he loses, it will be because of the economy — period.

Let’s educate Alter on the scandals of the Obama administration.  I’ll start:

What about plain old lying and broken promises? Do those count? 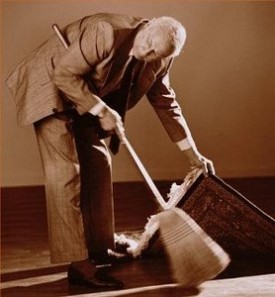