48 years ago today in Dallas John Fitzgerald Kennedy was murdered. If you believe the official version, JFK was shot by a lone gunman with communist leanings. If you believe Frank Rich then he was killed by Sarah Palin and the Tea Party.

The hate that ended his presidency is eerily familiar.

In the decades to come, America would be riveted by the Warren Commission report, whose finding that Oswald was the lone assassin has been challenged by all manner of conspiracy theorists, amateur historians, ideologues, nuts, novelists, and provocateurs. In 11/22/63, Stephen King writes that he consulted much of the assassination literature, “reading a stack of books and articles on the subject almost as tall as I am” before putting the probability that Oswald acted alone “at ninety-eight percent, maybe even ninety-nine.” His fictional alter ego, the schoolteacher Jake Epping, is, mercifully, not on an Oliver Stone crusade to subvert that math.

But another controversy from the assassination—one that has never received remotely the attention generated by the endless “grassy knoll” and “second gunmen” debates—is forcefully revived by King: the role played in Oswald’s psyche by the torrid atmosphere of political rage in Dallas, where both Lady Bird Johnson and Adlai Stevenson had been spat upon by mobs of demonstrators in notorious incidents before Kennedy’s fateful 1963 trip. As the time-traveling Epping gets settled in that past, he describes an inferno of seething citizens, anti-Semitic graffiti on Jewish storefronts, and angry billboards demanding the impeachment of Supreme Court Chief Justice Earl Warren and equating racial integration with communism. That last one, King’s protagonist observes, “had been paid for by something called The Tea Party Society.”

Immediately after the assassination and ever since, the right has tried to deflect any connection between its fevered Kennedy hatred and Oswald’s addled psyche with the fact that the assassin had briefly defected to the Soviet Union. But at the time even some Texans weren’t buying that defense. An editorial in the Dallas Times Herald chastised its own city for supplying “the seeds of hate” and “the atmosphere for tragedy.” The editor of the Austin American wrote that “hatred and fanaticism, the flabby spirit of complacency that has permitted the preachers of fanatical hatred to appear respectable, and the self-righteousness that labels all who disagree with us as traitors or dolts, provided the way for the vile deed that snuffed out John Kennedy’s life.”

I don’t know what really happened in Dallas that fateful day. I was three years old and lived a long way away. But if Oswald acted alone then he was a member of the fringe left, not the fringe right.

In order to place him on the right you have to believe that Oswald was not what he seemed but was really some kind of undercover agent working to infiltrate the left. But if you believe that then he was part of a conspiracy that was bigger than Dallas.

Theories like that are fun to discuss over beer and bong hits, but they aren’t proof of anything.

Frank Rich is correct that for nearly half a century the right has denied responsibility for the assassination of JFK. But for just as long some people on the left have been trying to pin it on them the same way some lefties spent the past year insisting that Sarah Palin shot Gabby Giffords. 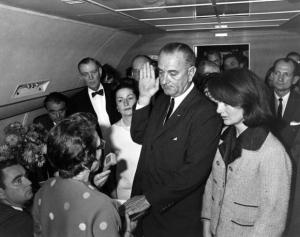 8 Responses to 48 years ago