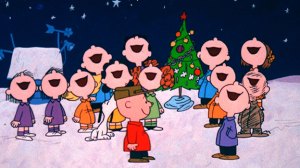 As far back as 1965 — just a few years before Time magazine asked “Is God Dead?” — CBS executives thought a Bible reading might turn off a nation populated with Christians. And during a Christmas special, no less! Ah, the perils of living on an island in the northeast called Manhattan.

Last but not least, the executives did not want to have Linus reciting the story of the birth of Christ from the Gospel of Luke. The network orthodoxy of the time assumed that viewers would not want to sit through passages of the King James Bible.

There was a standoff of sorts, but Schulz did not back down, and because of the tight production schedule and CBS’s prior promotion, the network executives aired the special as Schulz intended it. But they were certain they had a flop on their hands.

“They were freaking out about something so overtly religious in a Christmas special,” explained Melendez. “They basically wrote it off, like, hey, this is just isn’t going to be interesting to anyone, and it’s just going to be like a big tax write-off.”

Melendez himself was somewhat hesitant about the reading from Luke. “I was leery of the religion that came into it, and I was right away opposed to it. But Sparky just assumed what he had to say was important to somebody.”

As Charlie Brown sinks into a state of despair trying to find the true meaning of Christmas, Linus quietly saves the day. He walks to center of the stage where the Peanuts characters have gathered, and under a narrow spotlight, quotes the second chapter of the Gospel According to Luke, verses 8 through 14:

And there were in the same country shepherds abiding in the field, keeping watch over their flock by night. And, lo, the angel of the Lord came upon them, and the glory of the Lord shone round about them: and they were sore afraid. And the angel said unto them, Fear not: for, behold, I bring you tidings of great joy, which shall be to all people. For unto you is born this day in the city of David a Savior, which is Christ the Lord. And this shall be a sign unto you; Ye shall find the babe wrapped in swaddling clothes, lying in a manger. And suddenly there was with the angel a multitude of the heavenly host praising God, and saying, Glory to God in the highest, and on earth peace and goodwill towards men.

“ . . . And that’s what Christmas is all about, Charlie Brown,” Linus concluded.

The scene lasted 51 seconds. When Linus finished up, Charlie Brown realized he did not have to let commercialism ruin his Christmas. With a sense of inspiration and purpose, he picked up his fragile tree and walked out of the auditorium, intending to take it home to decorate and show all who cared to see how it would work in the school play.

When CBS executives saw the final product, they were horrified. They believed the special would be a complete flop. CBS programmers were equally pessimistic, informing the production team, “We will, of course, air it next week, but I’m afraid we won’t be ordering any more.”

The half-hour special aired on Thursday, December 9, 1965, preempting The Munsters and following Gilligan’s Island. To the surprise of the executives, 50 percent of the televisions in the United States tuned in to the first broadcast. The cartoon was a critical and commercial hit; it won an Emmy and a Peabody award.

Linus’s recitation was hailed by critic Harriet Van Horne of the New York World-Telegram, who wrote, “Linus’ reading of the story of the Nativity was, quite simply, the dramatic highlight of the season.”

People have been complaining about the commercialization of Christmas since before I was born, but lately things have been getting weird. Does anyone really feel offended by the words “Merry Christmas?” Do we have to use the politically correct “Happy Holidays?”

If you’re part of my generation and you weren’t raised in a cave by Jehovah’s Witnesses, A Charlie Brown Christmas was part of your childhood experience, along with Rudolph, Frosty and the Grinch.

Think about that for a second – how many “Christmas” movies, television specials or songs even mention the birth of Christ?

Me, I’m not particularly religious. I was raised in a holy roller church but I went off the reservation a long time ago. However I don’t feel threatened by religion – my old one or any of the others.

But you shouldn’t complain about the commercialism of Christmas if you forget that He’s the reason for the season.

This entry was posted in Uncategorized and tagged Religion, Television. Bookmark the permalink.