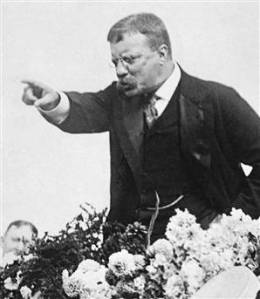 According to some media sources, a populist candidate for POTUS gave a real barn-burner of a speech in Osawatomie, Kansas yesterday:

But for most Americans, the basic bargain that made this country great has eroded. Long before the recession hit, hard work stopped paying off for too many people. Fewer and fewer of the folks who contributed to the success of our economy actually benefited from that success. Those at the very top grew wealthier from their incomes and their investments — wealthier than ever before. But everybody else struggled with costs that were growing and paychecks that weren’t — and too many families found themselves racking up more and more debt just to keep up.

Now, for many years, credit cards and home equity loans papered over this harsh reality. But in 2008, the house of cards collapsed. We all know the story by now: Mortgages sold to people who couldn’t afford them, or even sometimes understand them. Banks and investors allowed to keep packaging the risk and selling it off. Huge bets — and huge bonuses — made with other people’s money on the line. Regulators who were supposed to warn us about the dangers of all this, but looked the other way or didn’t have the authority to look at all.

It was wrong. It combined the breathtaking greed of a few with irresponsibility all across the system. And it plunged our economy and the world into a crisis from which we’re still fighting to recover. It claimed the jobs and the homes and the basic security of millions of people — innocent, hardworking Americans who had met their responsibilities but were still left holding the bag.

There were no reports of swooning, but I bet there wasn’t a dry seat in the house.

If you had been trapped in a hermetically sealed mayonnaise jar on Funk & Wagnall’s front porch for the past four years you would probably never guess that the soaring rhetoric you just read was coming from the incumbent president.

This entry was posted in 2012 Elections, Barack Obama and tagged Barack Obama. Bookmark the permalink.