Hailed as a hero by some for exposing what they claim are U.S. government misdeeds, as well as illegal and immoral conduct, he has websites like BradleyManning.org devoted to him and many prominent supporters — aside from, of course, Wikileaks editor Julian Assange. Pentagon Papers leaker Daniel Ellsberg stated flatly that he “was Bradley Manning” and that he was profoundly affected by Manning’s decision to leak. “I never thought,” he said of Manning, “for the rest of my life, I would ever hear anyone willing to do that, to risk their life, so that horrible, awful secrets could be known.” Manning himself can allegedly be counted among those promoting the lionization of his image, accused of having said about his own conduct: “This is possibly one of the more significant documents of our time, removing the fog of war and revealing the true nature of 21st century asymmetric warfare.”

Unfortunately, that sort of principled position is far from what his own defense team suggests motivated Manning’s alleged perfidy. No, they appear to be pursuing the defense that he was a gay man in a Don’t Ask, Don’t Tell military, struggling with gender identity issues, who never should have had access to the files in the first place. His attorney focused on Manning’s alter ego, Breanna Manning, and quoted an email from Manning where he said his “entire life feel(s) like a bad dream that won’t end. I don’t know what to do. I don’t know what will happen to me. But at this point I feel like I am not here anymore.” That characterization suggests he was no hero; not a man standing for principle nor acting in the best interest of the country but, rather, a sad troubled soul worthy of sympathy. It is a defense which appears to concede that he leaked the documents but also abandons any pretense of righteousness in exchange for an apologia for his behavior. That is a trade Assange himself would likely detest since he complained to then New York Times Editor Bill Keller that a profile of Manning “psychologicalized” him while giving “short shrift” to his “political awakening.”

My view of the WikiLeaks disclosures – leaving aside for the time being the Americans own vast carelessness over the files – is that they were absolutely wrong. The action was licensed only by Assange’s own massively arrogant assumption that he, Julian Assange, was somehow “entitled” to do so; that he was the Solon who could determine whether lives could be put at risk, relations between countries ruptured, names named, and life-and death operations opened to all.

We have come to regard almost any and all actions against “the state” automatically as works of virtue and worthy of praise. But our esteem is, in many instances, deeply misplaced and fraught with mischief and peril. Assange is more fame-seeker and groupie-collector than he is a moral agent. We should not confuse Assange, or the immature, morally witless Bradley Manning, with Solhenitsyn or Sakharov. The great Russians were heros who faced imprisonment, torture and ostracism to tell the truth. Assange was taxed to summon the courage for an appearance on the Today Show, with the grand inquisitor Meredith Vierra.

It may come as a surprise to the excitable protestors of the West that not everything a democracy does is wrong; that the United States is not monolithically wicked; that rules and laws have some purpose other than to be broken on some callow individual’s own authority; or that every one who has a secret to spill is not necessarily motivated by conscience.

Assange was a very poor choice of hero from the beginning. He should have been shunned for his recklessness, rebuked for his arrogance, and held to account for the many lives he has either wrecked or put in jeopardy.

But it seems to me that a lot of people made some hasty assumptions about Bradley Manning and Julian Assange that just aren’t true. People assumed that Manning was a brave whistle-blower acting on his conscience. It turns out he is a disturbed and pathetic individual. Others defended him as a gay man facing persecution by a homophobic military. Ironically, the evidence showed that his superiors were aware of his sexual orientation but ignored it.

As for Assange, even if he is innocent of any crimes in Sweden his behavior was that of a low-life scumbag. It’s easy to feel pity for Manning, but not Assange.

On the other hand, none of the evidence available so far would warrant a sentence of death or life in prison for either man. 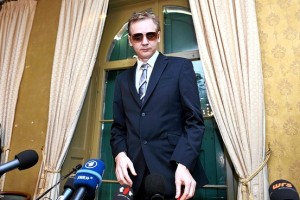 This entry was posted in Law and Constitution. Bookmark the permalink.