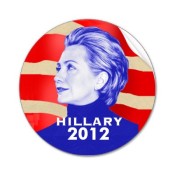 You won’t see this reported in the mainstream media, but Hillary Clinton likely took an astounding 10% of the vote in New Hampshire’s 2012 Democratic Primary last night. Here are the election results from AP (via CSPAN). We know the “Write In” candidate was Hillary Clinton because there was a concerted effort to write her in, and because New Hampshire has never produced a write in candidate with a double digit percentage for either party’s primary with the exception of LBJ in ’68. This suggests New Hampshire Democrats, and Hillary Clinton supporters specifically a) aren’t over 2008, and b) wanted to send a powerful message to President Obama. Personally, I would love to see the exit polling on this one.

For your gloating pleasure, here are the results from the five New Hampshire Dem primaries prior to 2012:

2000 (Scroll down to New Hampshire on this one)

Nowhere will you find write in numbers of this percentage or even close. Ralph Nader’s 2002 campaign comes closest with 1.82% of the vote. In fact, you have to go all the way back to 1968 and the write in votes that Lyndon B. Johnson received after he declared he would not run for the presidency to beat Hillary Clinton’s numbers here–he received 50% of the vote. I think everyone with an awareness of history can understand how odd that election was. Could 2012 be shaping up to deliver an equally odd election this year?

This does not bode well for Obama.

If we can extrapolate even half that to the general public across the nation, he losses the margin he had in 2008 and has to turn out his entire base and a significant portion of Independents to win. That’s not likely with the political climate as it is. Of course a third party candidate could throw a wrench in it (Looking at you AmericansElect Chairman, Wall-Street-junk-bond baron, and “former” Obama supporter Peter Ackerman).

What do you think? Bellwether for 2012, or just a meaningless outlier?