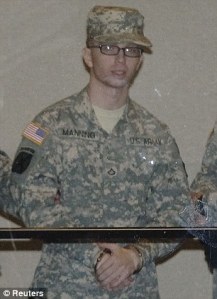 An Army lawyer assigned to consider evidence that Pfc. Bradley Manning leaked thousands of military reports and diplomatic cables to WikiLeaks has concluded that Manning should face a court martial on the charges, the Army announced Thursday.

Lt. Col. Paul Almanza, who oversaw a weeklong hearing into the case last month, concluded that the proposed charges of aiding the enemy, releasing classified information without authority and other violations of military law “are in the proper form and that reasonable grounds exist to believe that the accused committed the offenses alleged,” an Army statement said. It provided no other details on the contents of Almanza’s report, which was not released.

The most serious charge against Manning carries the potential death penalty, but prosecutors have said they will not seek a capital sentence in the case. An Army spokesperson confirmed that Almanza endorsed proceeding with the case precisely as prosecutors urged. “The Investigating Officer also recommended against seeking the death penalty in this case,” the spokesperson said.

This isn’t exactly a surprise. The hearing was basically a procedural formality and the evidence limited. The recommendation now goes up the chain of command and it’s unlikely to be rejected. Absent some kind of plea agreement there will be a court martial in a few months.