Sorry State of the Union 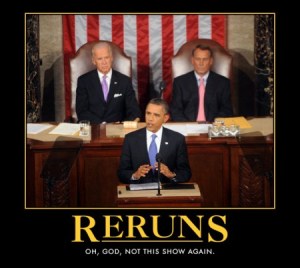 I’m not gonna watch it. It’ll just be a campaign speech and another pathetic attempt to blame the Republicans for everything that’s wrong with this country. Besides, Obama is barely tolerable when I’m drunk, and I’ll be sober tonight.

If I can only get drunk once a week I’m not wasting it on Obama.

55 Responses to Sorry State of the Union