Over at Reclusive Leftist, Violet addresses The Question whether Hillary would have done anything differently than Obama:

Hillary Clinton has never compromised on reproductive rights. In every situation, on every vote, in every speech, she has been firm about women’s right to control their own reproductive health. Her universal healthcare plan from the early 90s (“Hillarycare”) included coverage for abortion, and her refusal to compromise on that point is one reason the plan went down in flames. And that was abortion. It is beyond belief that she would offer up a needless compromise on contraception.

As for saying a nice thing about Doug Coe, again, you have to look at Hillary’s life and career. Is there any evidence that she is a secret godbag out to impose Dominionism on the country? Has anything in her life suggested that? Have any of her political stances suggested that? Did she do that as Senator? Is she doing that as Secretary of State?

No. Hillary Clinton is a Democrat, a progressive, and a feminist. She’s also a Methodist, with a quiet personal liberal-Christian faith. That’s who she is.

Obama, on the other hand, has spent his whole career avoiding taking stands on any topic that is the least bit controversial. He voted “present” (rather than “yes” or “no”) 129 times while a state senator in Illinois. He was against the war in Iraq in 2002, then said his position on Iraq wasn’t much different from George Bush’s in 2004. In 2007 he was against the war again, but as president he followed in Bush’s footsteps.

He attended a church for twenty years but paid no attention to the sermons. He hung out with crooks and radicals when it was helpful to his career, but tossed them under the bus and got amnesia when those friendships became problematic.

The only consistency in Obama’s whole career has been doing what was good for Obama’s career. Everything else is negotiable. 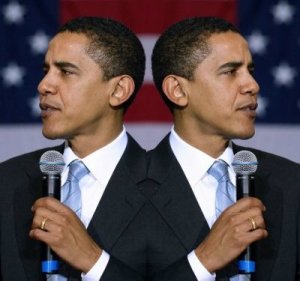 19 Responses to Hillary vs. Obama