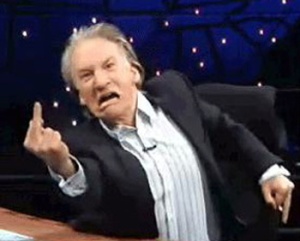 “If the first black president only has one term, America reads that as a failure. This is what the right wing hopes and prays for more than anything else. America looks at this one-term president and goes, ‘We tried a black guy, but it just didn’t work.’”

Four years ago anyone who questioned Obama’s experience or qualifications was immediately declared to be a racist and cast into the outer darkness. That’s ironic because those of us here in the outer darkness were judging Obama on the content of his character, not the color of his skin.

Geraldine Ferraro was right – Obama would not have stood a chance in 2008 if he was white. Like Bill Maher, many progressives became enamored with the idea of electing the first black president. In their eyes he was some demi-god, the chosen one, the Light-bringer, the realization of Dr. Martin Luther King’s dream.

They failed to see that the historical figure in their vision was just a narrative created by Obama’s political handlers. Not only did he lack experience and accomplishments, but there were several red flags about his background. A candidate’s college transcripts don’t necessarily predict his/her leadership qualities, but one of his prime qualifications was supposed to be his great intellect. Where was the evidence of that?

His education records were kept sealed. He claimed his records as a state senator were lost. We were forced to take his word about large chunks of his adult life. And then there were his relationships with unsavory characters like Bill Ayers, Tony Rezko and Rev. Jeremiah Wright.

Even if Barack Obama did not have the character flaws we have all seen in him, he simply was not ready to be president in 2008. That is a job you train your whole life for and few excel at perfoming. Maybe (probably) he would never have been ready. But imagine this – what if the Democratic establishment and the media had kept their thumbs off the scales and let the voters decide?

Maher thinks if Obama does win reelection he will have more accomplishments in his second term. If history is any guide, the opposite is true. Since the passage of the Twenty-Second Amendment no president has had more legislative or policy victories in his second term than his first. Eisenhower and Reagan were growing senile. Nixon had Watergate and Clinton got impeached. After Bush failed in his attempt to privatize Social Security he just ran out the clock on his second term.

Here’s a novel idea – let’s have color-blind elections from now on. When we step into the voting booths next November, let’s not even consider the race of the candidates. Let’s look only at their qualifications.

This entry was posted in 2012 Elections, Barack Obama and tagged Barack Obama. Bookmark the permalink.

107 Responses to Because he’s black