Don’t even bother to vote 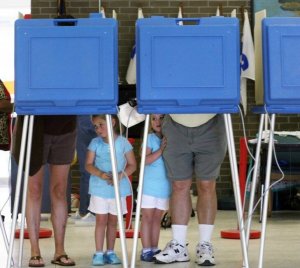 Matt Taibbi: Journalists Do Not Think Election Will Be Close, Only Say So To ‘Sell Advertising’

Matt Taibbi, contributing editor with Rolling Stone Magazine, appeared on CNN on Thursday where he discussed the state of the presidential race. Taibbi said that, of the journalists he associates with, there is a feeling that President Obama has already won the 2012 election. There is a “relatively popular incumbent, the economy is not doing terribly,” and the only reason the press suggests the race will be close is that “we have to sell advertising.”

When asked about polls showing a close race, Taibbi said:

I saw that poll – I don’t believe it. I don’t know any campaign journalists out there who thinks that Romney has a legitimate chance to win. And I’m not making a value judgment about any candidate. I just think that, in the press, there’s this general feeling that this election is a foregone conclusion. You have a relatively popular incumbent, the economy is not doing terribly and traditionally – especially the candidate who has a fundraising advantage – almost always wins.

Kinda reminds me of when those campaign journolistas decided that Hillary could not possibly catch Obama so she should quit running. Except she did catch him. So they declared him the winner anyway.

Matt needs to get out more. The economy sucks like a Hoover, unemployment is about twice the official number and we still haven’t recovered from the housing bust. Obama isn’t exactly popular either – his approval ratings are similar to Jimmy Carter’s. If anyone thinks the race is over they are crazy.

A delusional, two-timing Sen. John Edwards dreamed of a Supreme Court appointment, even as his political career crumbled under the weight of a seedy sex scandal, according to testimony today.

“He asked me to reach out to the Obama campaign and make clear his availability on the ticket,” said Hindery, managing partner at Intermediary Partners, a private equity firm in New York.

Edwards had been Sen. John Kerry’s running mate in 2004. If not the White house, Edwards’ ultimate goal was to someday reach America’s highest court, according to Hindrey.

“We talked about a more elaborate goal of Mr. Edwards, which was to be a Supreme Court justice,” Hindrey told the federal panel.

I guess they offered Edwards what he wanted. He endorsed Obama on May 14, 2008. But two months later somebody snitched him off to the National Enquirer and he was busted visiting Rielle Hunter at a Los Angeles hotel.

“Sorry, John. We really wanted to nominate you for Attorney General but that’s impossible now. Thanks for the endorsement though. Best of luck!”

I am embarrassed to admit I was once a lukewarm Edwards supporter. In my defense I was really hoping Al Gore would run and never looked closely at the other options.

Edwards was the original ABC (Anybody But Clinton) candidate. He was Hillary’s main competition for most of 2007. When he faded late in the year the CDS brigades flocked to the banner of Teh Precious.

Imagine if Edwards had managed to win the election before news of his love child leaked out. It would have crippled his presidency right from the start.

“I should have done my thinking with this head.”

This entry was posted in 2012 Elections, Barack Obama, Mitt Romney. Bookmark the permalink.

110 Responses to Don’t even bother to vote