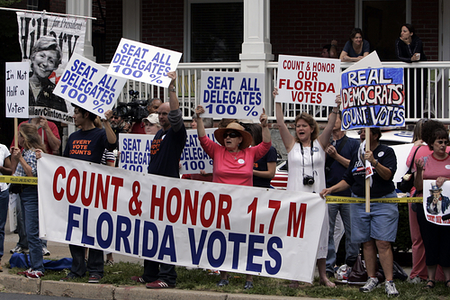 Today is the day we mourn the death of democracy in the Democratic party. On this day in 2008 the DNC Rules and Bylaws Committee effectively stole the nomination from Hillary Clinton and gave it to Barack Obama.

In August 2006, the Democratic National Committee adopted a rule that only Iowa, New Hampshire, Nevada, and South Carolina would be allowed to hold primaries or caucuses before Super Tuesday (February 5, 2008). Subsequently, the duly elected representatives of the people of Michigan and Florida set their primary elections in January. So then the DNC ruled that Florida’s 185 pledged delegates and 26 superdelegates as well as Michigan’s 128 pledged delegates and 29 superdelegates would not count in the nominating contest.

At Obama’s suggestion, he and Edwards, Biden and Richardson removed their names from the Michigan ballot, then urged their supporters to vote “uncommitted.” They did this to curry favor with the voters of Iowa and New Hampshire. Hillary Clinton kept her name as did Chris Dodd. All the candidates remained on the Florida ballot but agreed not to campaign in either state.

Hillary proposed that the election results stand and that both states’ delegations be seated accordingly at the DNC convention. The Obama campaign opposed that proposal because it would have cut his narrow lead in pledged delegates by more than 50%. Clinton supporters argued for re-votes in both states, but Obama supporters quietly blocked the idea.

Due to wins in traditionally red states and small caucus states as well as complex rules for the proportional awarding of delegates (where winning over 50% of the vote could result in substantially less than 50% of the delegates) Obama had taken the lead in pledged delegates. Hillary had won all the big states (except Illinois) and all of the “purple” or “swing” states that were critical to winning in November.

Despite claims by the media and the Obama campaign (but I repeat myself) that he was the inevitable winner, Hillary continued to win big victories in Ohio, Texas and Pennsylvania as well as several smaller states. By the end of May Obama’s lead in pledged delegates was less than the number of pledged delegates at stake in Florida and Michigan.

The Rules and Bylaws committee met on May 31, 2008 at the Marriott in Washington DC. According to the rules the RBC committee meeting was supposed to be open to the public. At a backroom meeting during the lunch break the committee made the following decision:

Why is this important?

When the primaries ended a few days later on June 3rd, Obama had an official lead of 62 pledged delegates and Hillary was ahead in actual votes. If the delegates had been awarded at full voting strength according to the official results, it would have been a net gain for Hillary of over 100 pledged delegates.

Either way it was ultimately the superdelegates – members of the Democratic party establishment – that selected Barack Obama as the nominee. They did this in defiance of democratic principles and the will of the voters.

That is something we will never forgive, and never forget.