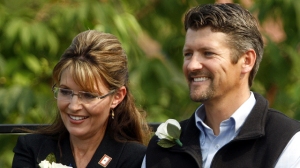 Obot heads will be exploding:

Sarah Palin said politics can be “pretty brutal,” but not as brutal as what her husband, Todd, and the rest of the cast endured in NBC’s upcoming competition show, “Stars Earn Stripes.”

“I don’t think physically I would be able to handle what they’ve gone through,” said Palin, adding that she’d “have to be doing a whole lot of pushups” to prepare for the show.

“It will blow you guys away when you see what they do,” she said. “I … was witness to the bumps and bruises at the end of some of the days.”

In “Stars Earn Stripes,” Todd Palin is one of eight stars paired with members of the military or first-responder forces to compete in challenges inspired by actual military exercises. Hosted by Gen. Wesley Clark, the show premieres Aug. 13.

Sarah Palin said Todd, a four-time Iron Dog snowmobile race champion, is well-suited for the competition because he’s “calm, cool and collected all the time.”

I would totally go gay for Todd Palin, but only if we were in prison or something. As Sarah once said, “Divorce Todd? Have you SEEN Todd? I may be just a renegade Hockey Mom, but I’m not blind!”

41 Responses to Another Palin goes Hollywood