In defense of capitalism 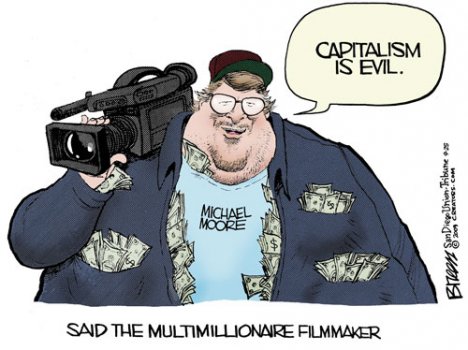 Capitalism has lifted the world out of poverty because it gives people a chance to get rich by creating value and reaping the rewards. Who better to be president of the greatest of all capitalist nations than a man who got rich by being a brilliant capitalist?

I majored in history and did my senior thesis on the Mussel Slough tragedy and the Southern Pacific Railroad. Once upon a time railroads were less popular than Wall Street bankers are today. The Southern Pacific was the inspiration for The Octopus:

The Octopus was the literary apotheosis of the power, ruthlessness, and efficiency of the modern corporation. The novel leaped from the mechanical power of the locomotive to the soulless power of the corporation:

. . . the galloping monster, the terror of steel and steam, with its single eye, Cyclopean, red shooting from horizon to horizon . . . symbol of a vast power, huge, terrible, flinging the echo of its thunder over all the reaches of the valley, leaving blood and destruction in its path; the leviathan, with tentacles of steel clutching into the soil, the soulless Force, the iron-hearted Power, the monster, the Colossus, the Octopus.

Norris modeled the railroad’s president Shelgrim after Collis P. Huntington. Shelgrim was “a giant,” a man with “an ogre’s vitality,” who had “sucked the life-blood from an entire people.”

I started my research expecting to find proof of the evils of capitalism. What I found was somewhat different from my preconceptions.

If you look at a map of California’s Central Valley you will see that virtually all the cities are in a straight line from Stockton to Bakersfield, connected by State Highway 99. If you look closely you will see railroad tracks running parallel to the highway the entire 250 mile distance between those two points.

That’s the original Southern Pacific line. In exchange for building the railroad line the federal government gave the railroad half the land within ten miles of either side of the tracks. At that time the land was mostly unsettled.

The railroad intended to sell those parcels once the line was completed and they received title from the government. They advertised the land for sale, inviting people to move in immediately and buy later. The ads offered the land at “$2.50 per acre and upwards.”

When the railway line was completed several years later the railroad notified the occupants of the odd-numbered sections that the actual sale prices would substantially more than $2.50 an acre because the market value of the land had increased. The railroad now wanted as much as $35 per acre. A long legal battle followed by a big gunfight ensued. The settlers lost both.

Most accounts of the story tend to leave out three important details:

1. Without the railroad the land was virtually worthless.

2. There were people willing to pay the railroad the asking price for the land.

3. Many of the so-called settlers were land speculators.

Two of the seven men killed at the gunfight on Brewer’s farm were prospective buyers. Henry Brewer (who was squatting on the land where the gunfight took place) was a speculator who already occupied one of the even-numbered parcels. So were many other members of the “Settler’s League.”

The speculators plan was to occupy the land and then buy it at $2.50 an acre, then turn around and sell it for its fair market value. Easy money, right? But the Southern Pacific didn’t want to play along. Why should they let someone else make all that money?

Farming in California has always been different from the “40 acres and a mule” small farming that was more common back east. In California farming was “agribusiness.” The wheat that was grown in the Central Valley in the 1880’s went by rail to Stockton and by ship to Europe.

Despite their reputation of charging “all the market can bear” the Southern Pacific had no interest in putting farmers out of business. They needed each other. If you study the growth and development of California you will realize that the railroads did not prevent prosperity.

This brings me back to my original point. I have to laugh at those mental midgets in the Occupy movement waving signs that say “Down with Capitalism.” Their sheltered lives were made possible by capitalism.

This is not to say that capitalism is perfect. It’s not, but neither is democracy. There are things we can and should do to ameliorate the worst effects of capitalism. But we shouldn’t talk about killing the goose that lays the golden eggs.

This entry was posted in Economy, Mitt Romney. Bookmark the permalink.

28 Responses to In defense of capitalism