And they wonder why they get taken for granted 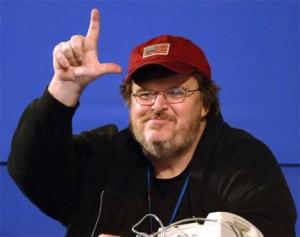 “I wouldn’t say I support him. I would say I will vote for him,” Moore said during a panel discussion with fellow Oscar winner Sarandon at the Traverse City Film Festival.

The director of “Roger & Me” and “Fahrenheit 9/11″ said he was “appalled and disgusted” by the administration’s use of drone missiles to attack suspected militants in Pakistan and elsewhere. Critics say the strikes sometimes kill civilians and help militants attract new recruits, while U.S. officials say they’re a necessary tool in the fight against terrorism.

Moore said despite his disappointment, he believes Obama has done some good things. “And I cannot get it in my head to say the words ‘President Romney.’”

Obama “has a conscience. He knows the difference between right and wrong,” Moore said. “And I’m hoping in a second term … he’ll be the Obama that we want him to be.”

And they wonder why they get taken for granted. They can’t claim complete ignorance but they are still hoping Obama will give them a pony. They remind me of battered spouses.

“He really does love me. He promised to change. What would I do with out him?”

But do you know what the worst part is? They consider themselves to be elites – smarter, wiser and better informed than the rest of us. The truth is they are only richer and more famous.

“Insanity: doing the same thing over and over again and expecting different results.” – Albert Einstein

I'm old and I can do what I want.
View all posts by Klown Mom →
This entry was posted in Barack Obama and tagged Barack Obama. Bookmark the permalink.