Via HelenK, this was Reince Priebus on ABC’s This Week with George Stephanopoulos. I had to laugh. But it got me thinking. How much is Harry Reid worth? 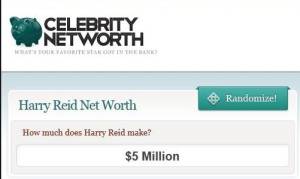 Now, unlike Mr. Romney, Reid didn’t spend very much time in the private sector at all. Nope, he earned almost all of that via his government connections. See for yourself:

The problem, for Harry Reid, is that since he graduated college, there hasn’t been a lot of time outside of government service. Reid was elected to the State Assembly in 1966 and in the past 43 years (when Reid went from 27 years old to 70 – and your humble correspondent went from 2 to 45), the only gap in public service was the two years in the mid-70′s between his term as Lt. Governor and his service on the Nevada Gaming Commission. And during that time he ran for Mayor of Las Vegas, leaving little time to build up a fortune in the private sector.

Does anyone want to believe that Reid has done this? That he has saved his government-salary pennies (including for all those years when he made far less than even $107,000.00 per year) and built up his fortune just out of the money we know he’s been earning since he entered public office? And what if Reid’s fortune is actually closer to the higher estimate of $6.3 million?

It’s just not credible that Reid has done this just out of his government salary.

Now that pederast thing that’s been going around, that’s funny. But I must agree with Jack Marshall. This is how you nail Harry Reid: with the truth. Pass it on.

Bitch, please.
View all posts by Woke Lola →
This entry was posted in 2012 Elections. Bookmark the permalink.