Could this tip Pennsylvania red? 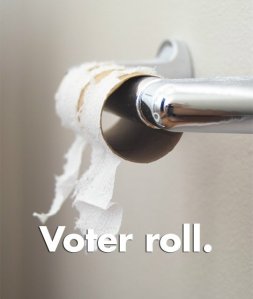 A tough new voter identification law championed by Republicans can take effect in Pennsylvania for November’s presidential election, a judge ruled Wednesday, despite a torrent of criticism that it will suppress votes among President Barack Obama’s supporters and make it harder for the elderly, disabled, poor and young adults to vote.

Commonwealth Court Judge Robert Simpson said he would not grant an injunction that would have halted the law, which requires each voter to show a valid photo ID. Opponents are expected to file an appeal within a day or two to the state Supreme Court as the Nov. 6 election looms.

“We’re not done, it’s not over,” said Witold J. Walczak, an American Civil Liberties Union lawyer who helped argue the case for the plaintiffs. “It’s why they make appeals courts.”

The Republican-penned law – which passed over the objections of Democrats – has ignited a furious debate over voting rights as Pennsylvania is poised to play a key role in deciding the presidential contest. Plaintiffs, including a 93-year-old woman who recalled marching with Martin Luther King Jr. in 1960, had asked Simpson to block the law from taking effect in this year’s election as part of a wider challenge to its constitutionality.

Republicans defend the law as necessary to protect the integrity of the election. But Democrats say the law will make it harder for people who lack ID for valid reasons to vote.

At the state Supreme Court, votes by four justices would be needed to overturn Simpson’s ruling. The high court is currently split between three Republicans and three Democrats following the recent suspension of Justice Joan Orie Melvin, a Republican who is fighting criminal corruption charges.

Sorry, but I ain’t buying the racism argument. I just don’t believe there are that many eligible voters out there that can’t reasonably get an identification card. If there is no voter fraud going on then the actual effect of this new law should be negligible.

This entry was posted in Voter ID and tagged Voter ID. Bookmark the permalink.

63 Responses to Could this tip Pennsylvania red?