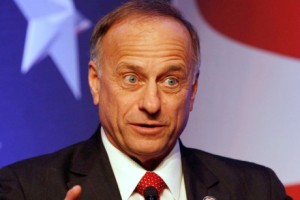 Rep. Steve King: I’ve Never Heard Of A Girl Getting Pregnant From Statutory Rape Or Incest

Rep. Steve King, one of the most staunchly conservative members of the House, was one of the few Republicans who did not strongly condemn Rep. Todd Akin Monday for his remarks regarding pregnancy and rape. King also signaled why — he might agree with parts of Akin’s assertion.

King told an Iowa reporter he’s never heard of a child getting pregnant from statutory rape or incest.

“Well I just haven’t heard of that being a circumstance that’s been brought to me in any personal way,” King told KMEG-TV Monday, “and I’d be open to discussion about that subject matter.”

The RNC should make all its members and candidates attend a mandatory sex-ed class.

This entry was posted in Abortion and tagged Abortion. Bookmark the permalink.