No shit? I never would have guessed 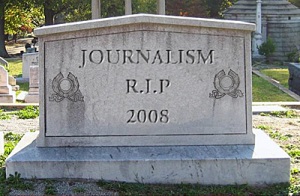 Department of Tell Us Something We Don’t Know:

In an interview on Tuesday with conservative radio host Laura Ingraham, ABC News’ White House correspondent Jake Tapper addressed many of the concerns that Republicans have with the media. Tapper said that he was concerned that key issues, like the economy, were being ignored in favor of political issues like Mitt Romney’s tax returns. Tapper said that he hopes the media does not unfairly cover this election and favor one candidate over another, as he says the institution did in 2008.

“I have said before… [that I] thought the media helped tip the scales. I didn’t think the coverage in 2008 was especially fair to either Hilary Clinton or John McCain,” said Tapper. “Sometimes I saw with story selection, magazine covers, photos picked, [the] campaign narrative, that it wasn’t always the fairest coverage.”

I am shocked! Shocked!

Good thing we had the The Reality Based Community (aka “The Progressive Blogosphere”) to balance things out.

58 Responses to No shit? I never would have guessed