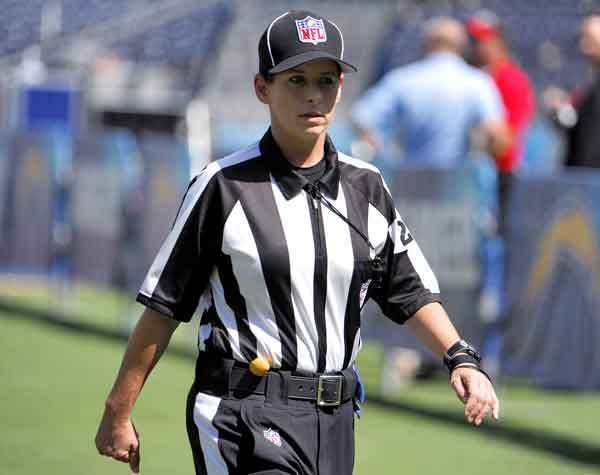 Shannon Eastin is in the starting lineup, set to become the first female official in an NFL regular-season game.

The 42-year-old has been assigned to work the Rams-Lions game Sunday in Detroit, where she will be the line judge.

Of course, this historic moment comes courtesy of a labor disagreement between the regular officials and the NFL, which is using replacements to start the season, Eastin among them.

Eastin, who has 16 years of experience, including most recently with the Mid-Eastern Athletic Conference, worked NFL exhibition games this summer, making her debut during the Packers-Chargers preseason game.

NFL and MEAC representatives didn’t want to comment on her abilities, but plenty of other people have, although NFL Commissioner Roger Goodell did weigh in on the subject when it was first announced she would be a replacement.

“She’s well-prepared for it, and I think she’ll do terrific,” Goodell said. “So we’re excited about that. And there are more coming, by the way. We’ve been working along this path to try to properly train and prepare a female official, and now we have the opportunity.”

Eastin, who has a background in judo and owns a school that trains football officials, is taking the groundbreaking moments in stride.

“Knowing that I’m a female in a man’s world, I have always put the most pressure on myself,” she said earlier this summer. “I understand that pretty much everything I do is going to be magnified.

“I know what I signed up for.”

I know, I know – it’s not the same as winning the White House.

But progress is progress.

7 Responses to Another barrier broken