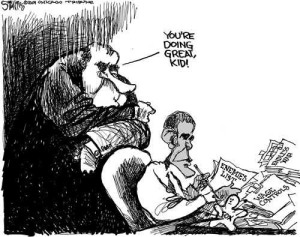 I’ve come to think of Walter Russell Mead as the “Mind of the Middle.” He’s not conservative or liberal; he just makes common sense. His article about noise versus knowledge once again strike me right where I am in the moment. I know that Team Obama has been trying their level best to amplify a noise machine of their own making and that there are some very smart minds out there who think this will work. I don’t, and I don’t know yet if that’s because I’m seeing clearly or because I am a cantankerous old fart who is not seeing clearly. It could be that the country is full of cantankerous old farts who are thinking similar thoughts and that this is the stream of consciousness I’ve tapped into.

Or maybe, as Mead suggests, we’re just following the spectacle too closely.

But at the same time, it must be clear to any serious observer of the contemporary scene that to follow the spectacle too closely involves a colossal waste of energy and time that could be more usefully expended on other pursuits. The media fixation with the minutiae of the campaign, the endless gaffe quest and mindless herd behavior by the journalistic pack, the bootless but inevitable speculation concerning the various coming landmarks and events from the Iowa State Fair through Election Night: all this is a necessary and unavoidable part of the process, and while the serious student of the contemporary world needs to keep an eye on the carnival, to be swallowed up in it and to spend undue time and mental energy on the meaningless and the trivial is to become less effective and less well informed.

I’ve also been thinking that for a while. I’ve wondered if I should step back a bit and try to re-gauge the big picture. That’s what I’ve been doing from time to time throughout this year and so far it has been a winning strategy for me. At this late date, with just less than 2 months left, how much information can be gleaned by paying attention day-by-day? Not much I suspect. Every weekend I keep watching as the left wins the info-wars on Memorandum and their ideas dominate throughout Saturday and Sunday, and often into Monday. But usually by Monday night or Tuesday morning, the right is back on top, or the middle is making headway. Noticing this pattern means I’m following too closely.

Mead pinpointed the problem, which is not with paying attention per se, but in locating the fine points among the infortainment nature of the media’s business model. I agree with what he says here:

In our country, we conceal in full view. The important news is mostly on the web and in at least some of the papers, rather than passed as handwritten notes between Henry Kissinger and Goldman Sachs. However the best newspapers often mix a few sprinkles of the good stuff in a vast tub of swill.  That’s often because the reporters and editors aren’t well trained to carry out a smart sorting process, but it’s also because the business model of the legacy media requires a lot of infotainment in the mix to keep a mass audience.

He goes on to compare it to cotton candy at the State Fair:

The legacy press is frequently attacked for being biased, which it often is, but the real problem is lack of discrimination: so much money and space go to what people used to call vanity (by which they meant emptiness and pointlessness rather than pride and conceit) that mainstream coverage is more like cotton candy than anything else: bright, sweet, evanescent and insubstantial — but hard to see through or keep clear of.

Thus it is in focus, not apathy, that we can find out what is going on with this American election. As I’ve said before, you can’t look at this year head on anyway, since there is so much political jacking going on. It takes a bit of sideways glance to figure out what is going on, a bit of hunting among the details, too. Take Gallup for example.

Just before the Convention season began, Eric Holder joined a “whistle-blower” lawsuit of Gallup that involved the alleged overbilling of hours for work that Gallup had done for various governmental agencies and an employee who was fired allegedly for complaining. The DOJ then filed their own suit against the company. I was alerted to this when I saw the top headline at Memeorandum four days after the GOP convention ended, one day before the DNC started. That headline showing no bounce for Romney. It struck me as an odd headline and I wrote about it at the time. In trying to figure out what I had noticed as a discernible change in Gallup’s tone, I stumble upon information about the lawsuit.

This discernible change in tone was confirmed last Friday when Gallup again had the top headline at Memeorandum, this time one day after the DNC ended, and this time showing Obama did get a bounce. How they can know that one day after a convention is beyond me, especially when it took the four days to find out the same thing about Romney. Curiouser and curiouser, no?

Consider that in that NBC article linked above, Michael Isekoff noted that Romney had an advantage going into the conventions.

Gallup — a Washington, D.C.,-based company that promotes itself as “the most trusted name in polling” — did not immediately respond to a request for comment. The announcement comes at an awkward time for Gallup, in the middle of an election season when the company’s polls are routinely cited in coverage of the presidential election. (In its latest tracking poll released Wednesday, Gallup has Mitt Romney ahead of  President Obama by a 47 to 45 percent margin.)

Also consider that in early July, just before the Labor department’s jobs numbers came out, Gallup published their job numbers as they always do, and the Implications section was very interesting indeed. Here’s the quote:

The employment situation in the U.S. remains fragile, which is reflected in the pullback in reported hope for a job. Job seekers may be reacting to less-than-optimistic discussions of the economy by the news media, as reflected in a lowered economic confidence rating in June. Just as likely, though, is that the decline is the result of real challenges Americans in the workforce faced during the job hunt in June.

Gallup’s drop in seasonally adjusted unemployment suggests that the U.S. Bureau of Labor Statistics may report a decline in unemployment when the numbers are released on Friday. However, as Gallup’s unadjusted data show, little has changed month over month, and just as many Americans were unemployed in June as in May.

Then came Gallup’s August numbers, and a veiled warning was included in the Implication section this time.

If there is to be true improvement in the employment situation in the coming months, unemployment will need to decline, and the percentage of people in the population participating in the workforce at their desired capacity will need to increase.

This was widely seen as a warning that any discrepancies between the Fed numbers and Gallup’s would indicate a “thumb on the scale” at the Federal level. 20 days later, just days before the GOP Convention was scheduled to launch, Holder filed his lawsuit.

Let’s think about this for just a minute. Gallup was showing movement for Romney in the days before the Convention season began. For 2 months in a row at least their jobs data was off somewhat from the Labor Department’s reporting, and in the month they were sued, they suggested there may have been a thumb on the scale. Suddenly, something that had never happened before happened: the government sue the most respected name in polling in the middle of a presidential campaign over what basically amounts to a tiny fragment of the billing corruption that goes on at the federal level.

We’re talking about a $2 million amount here, chump change in the vast scheme of the federal budget. The DOJ is not suing Defense contractors or other companies whose overbilling corruption runs in the billions of dollars. No, they are basically suing Cassandra to shut her up. And if you’re paying attention, you can figure it out. It is buried in the reams of verbiage being published every day, just as Mead said. Here’s another clue: there are e-mails between David Axelrod and Gallup that show the attempt at intimidation up close.

This, my friend, is what you call Chicago arm-twisting. It’s a variation of what Nixon and W. Bush did with the press, only it is much, much worse. It matters today because it creates a problem Mead outlined in his article–namely that it is nearly impossible for regular people to get the real facts they need because the sources of that information aren’t trustworthy. This is worse than Mead’s cotton-candy analogy. It means the cotton candy has been laced with cyanide. The purpose of Team Obama’s actions here are clear: amplify the noise machine and feed the electorate poison, because the only way he can win is if he fires up his base and depresses everybody else.

Bitch, please.
View all posts by Woke Lola →
This entry was posted in 2012 Elections, Barack Obama. Bookmark the permalink.