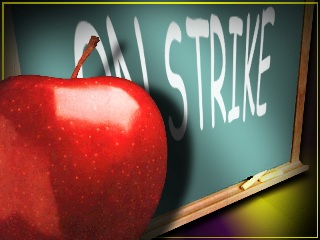 Teachers strike leaves parents scrambling: ‘As long as they’re on strike, I can’t work either.’

Less than a week after the bulk of Chicago Public Schools students and parents started their back-to-school routines, from early morning wake-up to late-night homework supervision, it all came to a screeching halt when teachers hit the picket lines Monday.

Regardless of their feelings about the strike, parents and guardians frantically sought last-minute child care, pleaded with their bosses for leniency and hoped that their kids would return to school sooner rather than later.

In some cases, students and parents arrived at schools, unaware classes were canceled Monday. At other schools, parents were highly mobilized, developing babysitting co-ops and publicizing alternatives to the CPS-sponsored Children First strike contingency plan.

Citywide for thousands of families, stress was high and consequences were real in a situation with an abrupt, late-night beginning and an unknown ending.

“I might be losing my job over this,” said Martina Watts, 38, as she dropped her kids off at Hefferan Elementary in Garfield Park. “As long as they’re on strike, I can’t work. I’m not getting paid, either.”

Chicago school teachers are already some of the highest paid in the country, but then again Chicago is an expensive place to live. Some critics have charged that based on test results the teachers aren’t doing a very good job, but you could argue that the low scores aren’t the teachers’ fault.

But the real issue isn’t how much the teachers deserve to make, it is how much Chicago can afford to pay them.

The optics here are bad for the teachers. As I’ve said before it’s hard to get the proles to support your cause when you are better off than the proles. Even worse, it’s the proles who are being inconvenienced the most.

This strike isn’t coming out of Rahm Emanuel’s pocket. The taxpayers of Chicago will bear the cost of the strike and the eventual new contract as well. During a time of economic crisis it’s not a really bright idea to piss off the taxpayers when the choice is basically between paying more taxes or breaking the union.

This entry was posted in Education and tagged Education. Bookmark the permalink.

48 Responses to Striking Out