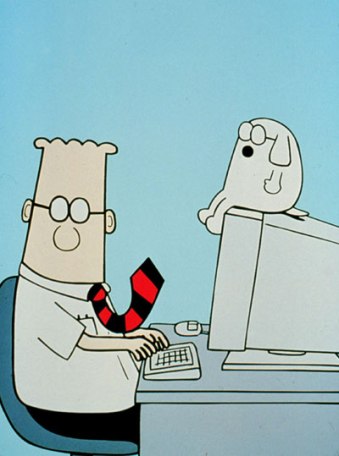 The other day Scott Adams announced he was voting for Mitt Romney. As he put it, “Yesterday was a fascinating day for me. I wrote a little blog post earlier in the week in which I said President Obama should be fired for putting resources behind medical marijuana prosecutions in California. And then the Internet puked on my shoes.”

Here is part of his response:

Supporters of President Obama argue that firing the President FOR ANY REASON means accepting a devastating alternative in a Romney presidency. While I applaud the complete dismissal of morality in the interest of practicality, let’s take a minute to see if the practicality argument is so cut and dried.

My observation is that voters often – perhaps usually – don’t get what they think they voted for. Nixon surprised everyone by getting cuddly with China. Bush Junior turned from isolationist to military adventurer. Obama went from weed-friendly to badass destroyer of state-approved dispensaries. Some fiscal conservatives have blown up the budget while some free-spending Democrats balanced it. If you think you can predict how a candidate will act in office, you might need a history lesson, or perhaps a booster shot of humility.

Now consider Mitt Romney, the most famous chameleon of all time. I submit that a hypothetical Romney presidency would be nearly impossible to predict with any accuracy. In each of his past leadership roles he has morphed into whatever the job required. During the primaries, his job required him to be far right. In the general election we see him drift toward the center, or as his advisor famously said, “Shake the Etch-a-Sketch.” It would be naïve to assume Romney wouldn’t shake it again once elected, given that even non-chameleon presidents do so.

Romney knows that the electorate is full of idiots and he needs to be a gigantic liar to win their votes. I totally get that. The funniest part is his budget plan that he promises to describe in detail after he gets elected. Dumb people see this as “He has an awesome fiscal plan!” Democrats see it as “He’s a liar with no plan!” I see it as “You know I’m a brilliant and experienced turnaround guy. I know how to do this sort of thing. And if I give details now it just paints a target on my back. So chill.”

In any event, Congress will be the ones who decide on the next budget. It will probably look similar no matter who gets elected. I don’t believe, for example, that a Romney budget would overfund the military. Congress would moderate that, and Romney probably doesn’t mean it anyway. Remember, his job today is to lie to get elected. His job once elected is quite different.

I also have no faith in my ability – or yours – to compare Obamacare (essentially a Romney plan) to how healthcare might change under a Romney administration. If you think you know the answer to that question, you’re kidding yourself.

Some Democrats say the biggest risk in a Romney presidency involves Supreme Court nominees. But I think we saw after the unexpected opinion from Justice Roberts on the Obamacare ruling that the court has a built-in safety net against being too blatantly partisan and destroying its own credibility in the process. I think the risk of a conservative-heavy Supreme Court ruining the country by adhering too slavishly (irony!) to the Constitution is low. You might not like some of their rulings, but they probably won’t kill you. And if we are being objective, a court with too many lefties would have its own risks.

That’s a very cynical view of politics, but there is a lot of truth in there.