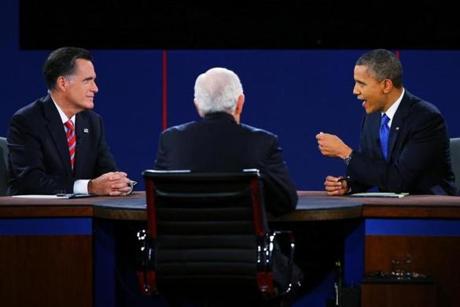 For the first time in four debates, nobody is talking about the moderator:

Finally, the moderator isn’t the story.

The cardinal rule of debate moderation is this: it isn’t about the moderator. But in the first three debates of the 2012 presidential campaign, the moderator invariably became part of the story: Jim Lehrer lost control; Martha Raddatz took too much; and Candy Crowley stole the spotlight when she decided, on a whim, to fact-check the candidates.

Enter Bob Schieffer, who disarmed the candidates with a Texas septuagenarian’s unassuming charm and facilitated their conversation with the calm confidence that comes from two decades as anchor of a Sunday morning news show.

Never once did President Barack Obama or Mitt Romney disregard his efforts to keep time and move the conversation forward, never once did they ride roughshod over him the way they had over Lehrer and Crowley. All six topics were covered, and when the debate ended, there was but a 35-second discrepancy in their speaking times, according to a clock provided by CNN.

Schieffer was far from perfect. Like Lehrer, he rarely interjected. On more than one occasion, the conversation drifted far from foreign policy — most memorably, to teachers unions and class sizes — and Schieffer stayed silent. (His one minor slip-up, when he accidentally called Osama bin Laden, “Obama bin Laden,” drew attention on Twitter but faded quickly) But by and large, Schieffer fulfilled the mission as defined by the Commission on Presidential Debates, which was to facilitate a fair debate but leave control of the conversation to the candidates.

When I was a kid all the newscasters were somber, serious men who told you the day’s news, but they didn’t make themselves part of it. They all seemed to have gone to the Joe Friday School of Reporting – “Just the facts, ma’am.”

Debate moderators are like referees and umpires – if people are talking about them afterwards it’s not a good thing. Journalism schools should use Shieffer’s and Candy Crowley’s performances as textbook examples of the right and wrong way to do it.

This entry was posted in 2012 Elections, Media and tagged Media, Presidential Debates. Bookmark the permalink.