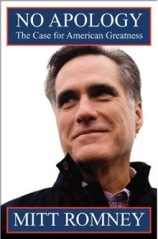 “Our grandchildren would watch helplessly as 44 percent of their total earnings were taken simply to maintain mandated Social Security, Medicare, and Medicaid payments to their grandparents and parents. Their total federal tax burden would far exceed half of what they earn. In practical terms, America would cease to be the land of opportunity. The American dream would be over.”

Romney blames the “political shell game” for getting us into this situation. The federal government has has habit of hiding its long-term liabilities. It publishes (or used to) an annual budget but not a balance sheet. Congress uses 10 years scoring to hide the costs of new entitlement expansion bills to the 11th year. Politicians (and lobbyists behind them) promise short term benefits while hiding the long-term costs. The first step to fixing this is tp create public awareness of the issue, and then be open to considering all possible approaches to fixing it. There are many possible paths to sustainable entitlements, what is needed is the political will and courage. At the same time it is important not to frighten seniors; reforms must be concurrent with guarantees that the benefits they rely on will not disappear.

Romney starts this chapter by recounting his experience at Bain with Morristown Memorial Hospital in New Jersey, back in 1983. This experience was prelude to Romneycare. He credits his friend Tom Stemberg for urging him “Mitt, if you really want to help people, find a way for everyone to get health insurance.” Romney initially thought this was impossible, specially as he had promised not to raise taxes. But he & his staff spent a year collecting and analyzing data and they did come up with model that works.

The basics for creating a workable, affordable system that insures everyone and keeps private insurance and personal choice intact are these: First, create incentives for those that can afford insurance to actually purchase it …. Second, create an exchange to help make buying insurance easier for individual – as opposed to corporate – buyers. … Third, help the poor buy their own private insurance with a sliding-scale subsidy.  …My own preference would be to let each state fashion its own program to meet the distinct needs of its citizens.

Achieving universal access is only part of the battle. The real challenge is reducing costs. In Romney’s analysis, fixing health care costs begins with fixing incentives.  Health-care consumers and health-care providers need incentives to keep costs down. His ideas are developed on his campaign site, and they start with repealing Obamacare.

Romney believes deeply in the value of education, and he is alarmed at the fact that America is lagging behind other nations in all measures in education. Education, says Romney, is a civil right.

There is no greater indictment of American government than the sorry state of American education. It is an epic failure.

During his third year as governor, Massachusetts’ fourth graders scored 1st in all fifty states in Math and English. Eighth graders  also scored 1st in Math and English. This was the 1st time any state had been ranked first in all four measures. Romney credits not just himself, but his predecessors and the largely Democratic legislature for working together. As in with healthcare, Romney approaches the problem of education by looking at data, and looking at  incentives and accountability as well as the obstacles to reform that teachers unions present. To show how he expands this vision to the national level, I will again cheat by point to his website on his plan for education.

Open thread for anything relating to domestic policy, Romney, or the elections.