Is Riverdaughter A Closeted Tea Partier? 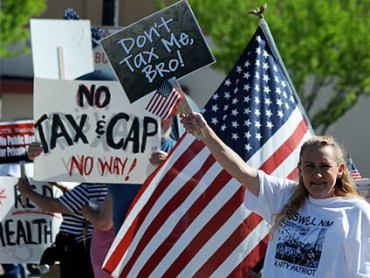 Check out her latest:

Then there was a new Poll Tax that was used to raise revenue for new wars. Ahhh, the military industrial complex of the middle ages. Some things never change. The tax was harsher on some peasants than others. Women were especially hard hit for some reason, regardless of their employment status or hardships. The King’s ministers probably just eliminated some deductions and futzed with the cost of living adjustments or something. They probably had their own Bowles-Simpson commission.

So, the peasants revolted.

Oh, look! Tim Geithner is telling us that we’re going to get nailed again. Isn’t it swell that those of us who have given up a good portion of our skins are now going to be completely flayed? Remind me to review how much in income taxes and social security taxes I’ve paid in the past 10 years. I think we all need to pull out our tax returns and report on this. Why should my kid be penalized by these spending cuts after the decades of taxes I have paid into my social insurance policies and all of the other things I expected from my hard earned money?

How come we paid so much money and have so little control over how it gets spent? Why can’t we decide to spend that money on *ourselves* and not some stupid war or a giant border fence or Alabama? Why am I, a New Jerseyan, spending so much money per year on states in the south who insist on electing selfish, aristocratic hardasses to Congress? Why am I forced to participate in my own oppression? Will someone answer me that?

That sure sounds a lot like Tea Party rhetoric to me. She is also big on populism. Is there secretly a Tea Partier hidden inside of Riverdaughter, yearning to breathe free? That sure would explain her over-the-top hatred of that group. After all, the worst homophobes are gays in denial of their sexuality.

Go for it Kim, let your Gadsden Flag fly!

37 Responses to Is Riverdaughter A Closeted Tea Partier?