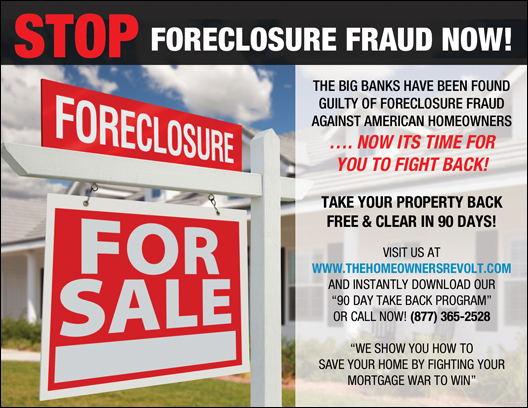 (WARNING: This another one of those posts where I defy liberal orthodoxy and cause people to think I have turned into a whip-kissing racist Republican. You have been warned.)

Finding Little Evidence Of Foreclosure Fraud, Feds Give Up

Over at the Huffington Post they’re still talking about “rampant foreclosure fraud.” But I was always skeptical of claims banks were stealing houses from innocent homeowners. One big problem with that theory: Banks lose money on virtually every house they take back in foreclosure. And now the federal government seems to agree.

With a pair of terse notices yesterday, the Office of the Comptroller of the Currency basically admitted that its elaborate process for turning up evidence of fraud in hundreds of thousands of loan files was a waste of money.

The outcome shouldn’t come as a surprise. After I wrote a piece critical of the parallel mortgage settlement with state attorneys general last year, comparing it to the deeply flawed tobacco settlement, I was barraged with comments from critics accusing me of downplaying foreclosure fraud. I responded with one simple question: Has there been a single case in the past five years of a homeowner who was current on his mortgage being foreclosed through fraud?

Silence. I did get a lot of legal gobbledygook from marginally competent lawyers who, as it turns out, were the real crooks in the foreclosure crisis. For excessive fees, they offered underwater borrowers the false hope they could somehow keep their homes without paying for them, either by challenging the foreclosure paperwork or convincing a judge that the national registry system known as MERS was not the legitimate party to foreclose. Those tactics mostly failed. The Federal Trade Commission has a website devoted to protecting borrowers from the real scammers in the foreclosure crisis, and prosecutors have found plenty of fraud. Last September North Carolina AG Roy Cooper, for example, sued three foreclosure assistance firms for charging upfront fees and delivering nothing in return.

The reality is robosigning couldn’t have been the cause of foreclosure fraud because robots can’t engage in the self-interested behavior that underlies fraud. Robosigning was just an acknowledgement that in a large, modern lending institution only the central computer registry of mortgages contains all the information about loans, and no lawyer at the periphery can possibly possess additional information beyond what is in that registry.

Fraud is a flexible term, of course, and many lawyers think it includes lending money to people who have no hope of paying it back. This so-called “predatory lending” doesn’t make any economic sense, unless you’re willing to buy the theory that the fees flowing from an ultimately unprofitable loan were enough to induce bankers to destroy their own institutions in search of a year-end bonus. That’s possible, but it downplays the responsibility of the borrowers who signed detailed loan documents, filled with caveats and cooling-off periods mandated by federal regulators.

As for robosigning computers stealing homes, still not much evidence for that. If you know of a case, do let me know.

I wrote a post or two about foreclosure fraud a while back. When the foreclosure crisis first started I was gullible enough to accept the claims of fraud at face value. But when I started to write about it something just didn’t add up.

According to the OWS crowd and some lefty bloggers, the foreclosure crisis was all a big scam wherein the Evil Big Banks conspired to steal peoples’ homes by getting the people to borrow money and then foreclosing on them. The only problem is that scheme does not make any sense.

The purpose of fraud is to make money. Fraud is a non-violent crime. The scam artist wants to convince the “marks” (that’s us) to part with our money and/or valuable property in exchange for something of little or no value. There are lots of variations, including everything from check forgery and credit card scams to pyramid schemes and full-fledged “stings”.

Now let’s look at a typical real estate transaction. You have a buyer, a seller and a lender. The seller is the grantor. They own the property and want to trade it for money. They will make money only if they receive more for the property than they originally paid. Up until recently it was commonplace for sellers of real estate to make huge profits (aka “capital gains”) from properties they held only a short time.

The buyer wants to acquire the property either to live in, as an investment, or both. They are willing to trade money in exchange for the property. Unfortunately, they don’t have enough money to make the seller happy.

This is where the lender comes in. The lender has money they want to invest in order to make more money. One way they do this is by loaning the money to other people with interest. The interest is their profit. They make money only if the loan AND the interest are paid. This may take 20 or 30 years to complete.

It is important to note that the lender does not really want the property. If they did they would have simply bought it themselves. They want the buyer to fulfill the loan agreement.

There are typically some other people involved such as realtors, inspectors, examiners and escrow agents. These people make their money off the transaction and once the sale is complete they are no longer involved. The seller walks away with the money and their part is finished as well. All that is left is the buyer and the lender. As long as the buyer keeps making the agreed upon payments everything is hunky-dory.

Before the lender can foreclose on a property there are lots of required hoops they have to jump through first, starting with an official notice to the buyer that they missed one or more of the agreed upon payments. I am not going to describe all those hoops because they vary from state to state and this post is getting too long already.

Normally when a property has been foreclosed upon it is sold at auction by a trustee. The proceeds of this sale are then used to satisfy the loan contract. The measure of damages for breach of contract is to put the lender in the same position they would have been in had the contract not been breached (including costs and fees).

If there is any money left over after the sale it is given to the buyer. If the sale does not cover the lender’s damages then they can pursue a deficiency judgment against the buyer. The lender cannot make an extra profit in a legitimate breach of contract action. Under the law the best case scenario is for lender to end up with the same amount of money either way. More than likely they will end up with less money after a foreclosure.

In order to make money though foreclosure fraud more than one party must be involved and the property in question must be worth substantially more than the value of the loan. The purpose of that kind of a fraud is to acquire the property for less than it is worth and then sell it at a profit and the scam takes place in relation to the trustee’s sale. But that won’t work if the property is worth less than what is owed. These days upside down mortgages are more common than the other kind.

Defenses to foreclosure like “show the note” and claims of robo-signing are legal technicalities rather than defenses on the merits. Mortgages are often bought, sold and traded between lenders. Quite often they screw up the paperwork. But just because they screwed up the paperwork doesn’t mean you don’t owe the money.

Foreclosures and evictions are often traumatic because our homes are tied to our sense of identity. But it isn’t “yours” until you finish paying for it. If you don’t pay for it you gotta give it back. If somebody loans you money they aren’t being greedy when they expect you to pay it back.

I was born and raised in a different country - America. I don't know what this place is.
View all posts by Myiq2xu - BA, JD, FJB →
This entry was posted in Housing Bubble, Wall Street Banks. Bookmark the permalink.