Lies, Damn Lies, And The News 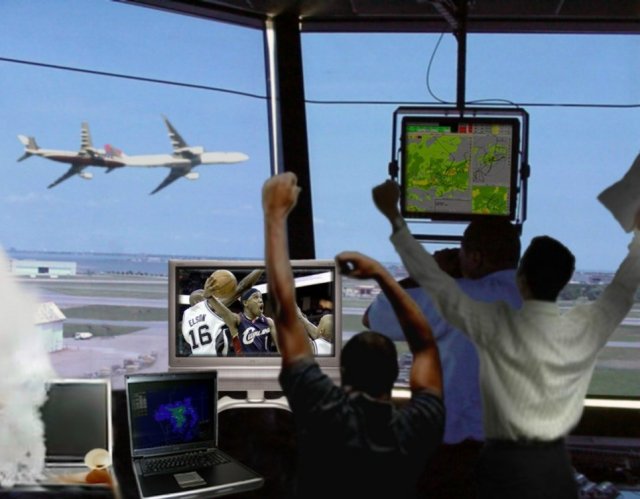 Millions of travelers frustrated by airport delays may be relieved that Congress did an about-face this week, passing legislation to end the furloughs of FAA air traffic controllers.

But advocates for everyone else directly affected by the so-called sequester are miffed with the selective undoing of what were supposed to be across-the-board cuts.

“We’ve got to save the traveling public but I ask the question about 5,000 children in Texas that will lose Head Start or the millions of seniors or our military families that will lose the support because we’ve got the sequester,” Rep. Sheila Jackson Lee, a Democrat from Texas, said Friday.

Joseph Beaudoin, a former federal air traffic controller who now heads the National Active and Retired Federal Employees Association, was glad to see Congress reverse his former colleagues’ furloughs. But he is worried about all the other federal government workers who aren’t so lucky.

“Last month, Congress took action to ensure that furloughs could be avoided for TSA agents, meat inspectors and border patrol agents. However, hundreds of thousands of federal employees providing services across the United States still face furloughs,” Beaudoin said in a statement. “We’ve had enough of the reactionary legislative response. It is time for Washington to come together to agree to smart, sensible approaches to tackling the budget.”

The liberal activist group MoveOn.org was more scathing, contending the reversal was “solely to appeal to wealthy contributors who fly frequently.” It issued an online petition to “demand that any emergency legislation to eliminate airline delays caused by the sequester also restore cuts to Head Start, cancer clinics, housing assistance, food pantries, and unemployment insurance.”

Meanwhile, NDD United — a coalition of 3,200 groups focused on public health, medical research, education and other areas — sent a letter to Congress before the FAA reprieve was passed. “Damage control is not a sound fiscal policy. We urge you to reject any efforts to pick favorites and instead fix sequestration, once and for all,” the letter said.

The news media is supposed to inform and enlighten. This article does neither. What it does is misinform, but it is so carefully worded that you really can’t say it’s untrue.

If you didn’t know any better and just skimmed the article you would get the impression that Congress decided to restore the cuts to the FAA caused by the sequester. But this bill does not restore one red cent of spending.

See, what happened is this: Congress and the White House couldn’t agree on a budget. That triggered the Sequester. Contrary to popular belief (thanks to our press corpse) the Sequester is not some draconian plan to shove grandmothers off of cliffs. All it is is a default budget for the federal government.

This default budget reduces some federal spending by about 3 percent compared to last year. Because it only applies to certain parts of the budget, even after the Sequester the total federal budget for this year will be slightly higher than last year.

Even though the Sequester was originally a White House idea, for political reasons Obama wants to make the Sequester cuts as painful as possible, thus causing public pressure that will force the GOP to agree to tax increases and other stuff he wants but they oppose. That is why we heard dire warnings for months before the Sequester finally took effect on March 1st.

The Obama administration claims (based on their interpretation of the law) that their hands are tied and they have no choice but to furlough air traffic controllers, cutting their hours by 10%. What this bill does is give the FAA discretion as how the cuts are implemented so as to keep the ATC’s on the job. In other words, their hands will be untied.

If it was up to me I would have done nothing. Let Obama play his games. It’s been years since I’ve flown anyway (except for trips via the Free Mexican Air Force) But apparently some animals are more equal than others.

It should be noted that the GOP previously proposed a similar bill that would have given Obama more discretion as to how to make all the Sequester cuts, but he threatened to veto it and it never passed. He wants to cause pain. His Sequester policy apparently is “This is gonna hurt you more than it’ll hurt me”.

I was born and raised in a different country - America. I don't know what this place is.
View all posts by Myiq2xu →
This entry was posted in Sequester. Bookmark the permalink.

60 Responses to Lies, Damn Lies, And The News