Fake But True Is Still Fake 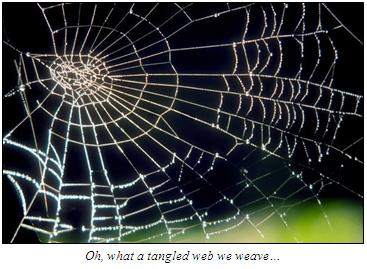 A well-known female liberal blogger and radio host at the University of Wyoming (UW) is being accused by police of fabricating a rape threat against herself to appear as if it came from a conservative.

The obscene message directed at activist Meg Lanker-Simons was posted on a college “crush” Facebook page earlier this week and immediately ignited outrage from the college community.

“I want to hate f**k Meg Lanker-Simons so hard. That chick that runs her liberal mouth all the time and doesn’t care who knows it,” it read. “I think its hot and it makes me angry. One night with me and shes gonna be a good Republican bitch,” the post reads, according to a screenshot.

Before the post was removed, Lanker-Simons commented on it and on her own blog, calling it “disgusting, misogynistic, and apparently something the admins of this page think is a perfectly acceptable sentiment.”

She also encouraged the poster to seek help at the UW Counseling service and ends with the advice:

“Instead of focusing on how angry and turned on me ‘running my mouth’ makes you, perhaps you should listen instead. You might learn something.”

But on Monday, The University of Wyoming Police Department issued a citation to Lanker-Simons for “interference” for “false statements she made to the UW Police Department,” according to a UW statement referred to by Laramie Boomerang Online.

“Subject admitted to making a controversial post on UW Crushes webpage and then lied about not doing it,” according to the citation.

The University of Wyoming also confirmed a statement that the police had “”obtained substantial evidence verifying that the offending Facebook post came from Lanker-Simons’ computer, while the computer was in her possession.”

According to a Facebook page that apparently belongs to Lanker-Simons she is a member of the University of Wyoming Gender & Women’s Studies group as well as the school’s chapter of The Nonviolent Communist.

This could be nothing more than just a disturbed young woman seeking attention. But even if it is I think there is something revealing here.

Vile Prog Feminists (a sub-species of proggus vileum) take it as an article of faith that all men are misogynists and rapists. (This is probably because they are used to dealing with Vile Prog males.) So they assume that conservative males are even worse.

In the mind of this poor woman she was just creating something “fake but true”. She knows there are lots of guys like that out there, she just couldn’t find one. So she made one up. Easy peasy.

Since police cited her, supporters have a constructed a Facebook page entitled “Meg Lanker-Simons is innocent.”

“Meg Lanker-Simons is innocent we believe what she did was justified and deserves not to be held accountable for her accusations we stand behind you sister,” reads that page’s description.

Some people have an endless capacity for denial. 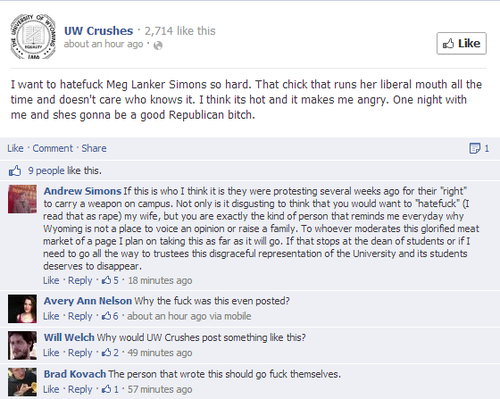 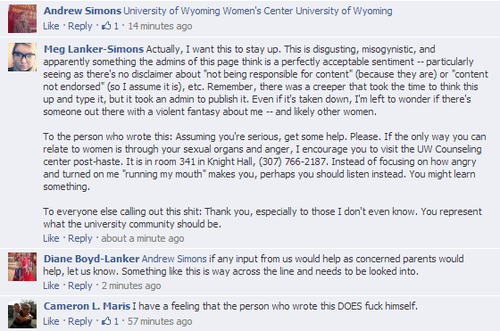 26 Responses to Fake But True Is Still Fake