Nanny State and the Professor 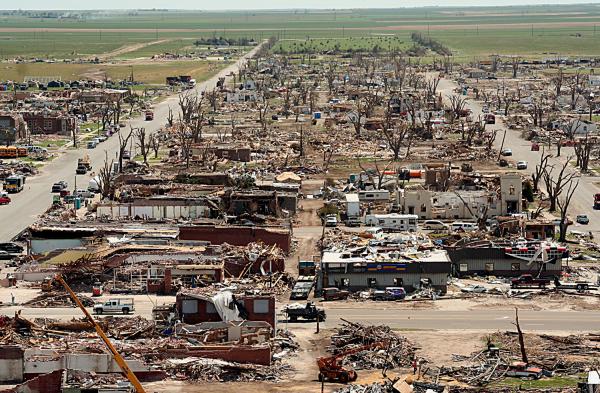 Bill Nye on natural disaster prevention: “We could pass laws making it difficult or undesirable to build fragile houses in the path of tornadoes”

As tornadoes continue to batter America’s heartland, on Tuesday evening “Piers Morgan Live” invited Bill Nye and Bjorn Lomborg to join the program for an impassioned discussion on the environment, and climate change.

Noting that it’s impossible to persuade Mother Nature once a natural disaster is underway, Nye suggested that the goal should be to improve the ways in which such events are planned for, and dealt with, all with a mind towards limiting trauma and tragedy:

“We could, for example, pass laws making it difficult or undesirable to build fragile houses in the path of tornadoes,” said the gentleman forever known as “Bill Nye the Science Guy.” “I’m not sure we disagree about that.”

Every year natural disasters strike at various places around the nation. The destructive power of Mother Nature is awesome to behold. I was an eyewitness to the Loma Prieta earthquake back in 1989 when Big Mama shook the whole map like a Polaroid picture. (I’m pretty sure she was PMSing that day.) Every year we spend a lot of money repairing the damage she causes.

Over the past several decades California has spent hundreds of billions of dollars retrofitting or replacing bridges, buildings, stadiums, dams and other structures to make them earthquake resistant. This is in addition to some very strict building codes for all new construction. (Notice I said “earthquake resistant”. That’s because nothing is earthquake proof.)

We could do that same kind of thing all across the country. We could tell people in Oklahoma they can’t build nothing that ain’t tornado resistant. We could tell the people in NOLA that their houses and businesses have to be able to handle a category-5 hurricane. We could pretty much ban mobile homes everywhere.

Of course that would price some people right out of the housing market and it would dramatically change the appearance of architecture around the country. I’m sure there would be other unintended consequences as well. But we could do it.

The question is, do we want to?

Where do “common sense building codes” cross over into nanny statism? We have helmet laws and seat belt laws and smoking laws and laws regulating the size of soft drinks. All of them were passed for our own good. So where does it stop?

Let’s not forget, every single one of those laws restricts our freedom just a little bit.

How much is too much?

100 Responses to Nanny State and the Professor