Bill Maher is an Asshole

The View Hosts Clash Over Bill Maher: Was It OK For Him To Call Palin’s Son ‘Retarded’?

Is it ever OK to call someone “retarded?” What if that someone is the five-year-old son of a former vice presidential candidate? Those were the questions The View hosts tackled Monday in light of a recent report about Bill Maher using that word during a live stand-up set in reference to Sarah Palin‘s son Trig, who has Down Syndrome. While none of the four women were willing to wholesale defend the use of the word, some were quicker than others to condemn the comedian.

Barbara Walters began by telling a story about her own developmentally disabled sister who was called “retarded” all of her life. Walters said she was “happy” when the “derogatory” term went out of fashion and people began saying “mentally challenged. But that doesn’t mean she agreed with Palin that Maher was being a “bully” when he made his joke. “Do I think it was unfortunate that he did it?” she asked. “Yes I do. Do I think that he realized what it was? No, I don’t I don’t think he intended it be mean-spirited.”

In response, Elisabeth Hasselbeck wasn’t quite as eager to let Maher off the hook. “I think there’s not a person on this earth right now who has a sense of mercy and love and understanding,” she said, “who wouldn’t go to a group of people or in front of an audience and not know that that would maybe make someone feel bad.” She added that it’s “odd” that her co-hosts would be so “generous” to give Maher “the benefit of the doubt.”

Is there a nice way to call a little boy with Downs Syndrome “retarded”? Is there any context where that wouldn’t be offensive?

This was no accident. Maher is a shock-jock comedian. His stock in trade is making people laugh by saying offensive things. He picks his words carefully for maximum effect. Trig Palin was not a recent news item so there was no reason to even mention him.

Bill Maher has a right to be offensive. If that stuff is your cup of tea then you have a right to laugh at it. But having the right to do something doesn’t make it right.

If some comedian used the N-word to refer to one of the Obama girls would Baba Wawa have considered that to be acceptable?

I would hope not. 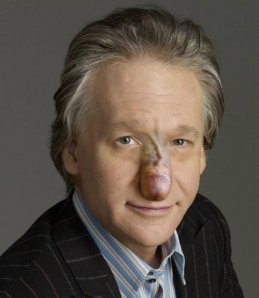 37 Responses to Bill Maher is an Asshole