BREAKING: The Egyptians Are Revolting!

The Egyptian army has overthrown President Mohamed Morsi, announcing a roadmap for the country’s political future that will be implemented by a national reconciliation committee.

Morsi’s presidential Facebook page quoted the disposed president as saying he rejected the army statement as a military coup.

Sisi called for presidential and parliamentary elections, a panel to review the constitution and a national reconciliation committee that would include youth movements. He said the roadmap had been agreed by a range of political groups.

Morsi was believed to be holed up at a Republican Guard barracks in Cairo, surrounded by barbed wire, barriers and troops, but it was not clear whether he was under arrest.

Islamist supporters of Morsi who have gathered in a Cairo suburb reacted angrily to the announcement by the army.

I honestly don’t know if this is a good or bad development. I don’t think any of the experts bloviating about this knows either, including the ones know a lot more about this than me. It’s way too early to predict how this will end.

So far it’s been mostly peaceful. That could change at any time. The military says they are going to give power to an interim government pending new elections and a constitutional convention. That’s encouraging but we heard all that two years ago and it didn’t work out so well.

Obama is conspicuously absent from any kind of leading role in this which is probably a good thing. His foreign policy (and Hillary’s) is what created this mess in the first place.

My recommendation: Be hopeful but cautious. Wait and see. (It’s not like we have any control over the situation anyway.) 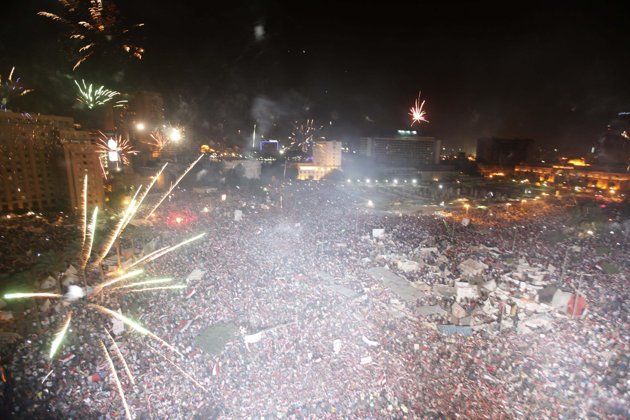 I was born and raised in a different country - America. I don't know what this place is.
View all posts by Myiq2xu - BA, JD, FJB →
This entry was posted in Arab Spring, Egypt and tagged Egypt. Bookmark the permalink.

44 Responses to BREAKING: The Egyptians Are Revolting!