“Weapons of Mass Destruction” is the Mother of All Squirrels 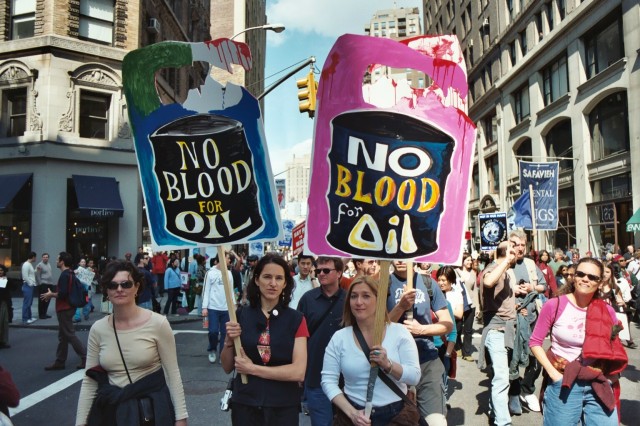 Dr Nafeez Ahmed in The Guardian:

On 21 August, hundreds – perhaps over a thousand – people were killed in a chemical weapon attack in Ghouta, Damascus, prompting the US, UK, Israel and France to raise the spectre of military strikes against Bashir al Assad’s forces.

The latest episode is merely one more horrific event in a conflict that has increasingly taken on genocidal characteristics. The case for action at first glance is indisputable. The UN now confirms a death toll over 100,000 people, the vast majority of whom have been killed by Assad’s troops. An estimated 4.5 million people have been displaced from their homes. International observers have overwhelmingly confirmed Assad’s complicity in the preponderance of war crimes and crimes against humanity against the Syrian people. The illegitimacy of his regime, and the legitimacy of the uprising, is clear.

Whatever the case, few recall that US agitation against Syria began long before recent atrocities, in the context of wider operations targeting Iranian influence across the Middle East.

In May 2007, a presidential finding revealed that Bush had authorised CIA operations against Iran. Anti-Syria operations were also in full swing around this time as part of this covert programme, according to Seymour Hersh in the New Yorker. A range of US government and intelligence sources told him that the Bush administration had “cooperated with Saudi Arabia’s government, which is Sunni, in clandestine operations” intended to weaken the Shi’ite Hezbollah in Lebanon. “The US has also taken part in clandestine operations aimed at Iran and its ally Syria,” wrote Hersh, “a byproduct” of which is “the bolstering of Sunni extremist groups” hostile to the United States and “sympathetic to al-Qaeda.” He noted that “the Saudi government, with Washington’s approval, would provide funds and logistical aid to weaken the government of President Bashir Assad, of Syria,” with a view to pressure him to be “more conciliatory and open to negotiations” with Israel. One faction receiving covert US “political and financial support” through the Saudis was the exiled Syrian Muslim Brotherhood.

These strategic concerns, motivated by fear of expanding Iranian influence, impacted Syria primarily in relation to pipeline geopolitics. In 2009 – the same year former French foreign minister Dumas alleges the British began planning operations in Syria – Assad refused to sign a proposed agreement with Qatar that would run a pipeline from the latter’s North field, contiguous with Iran’s South Pars field, through Saudi Arabia, Jordan, Syria and on to Turkey, with a view to supply European markets – albeit crucially bypassing Russia. Assad’s rationale was “to protect the interests of [his] Russian ally, which is Europe’s top supplier of natural gas.”

Instead, the following year, Assad pursued negotiations for an alternative $10 billion pipeline plan with Iran, across Iraq to Syria, that would also potentially allow Iran to supply gas to Europe from its South Pars field shared with Qatar. The Memorandum of Understanding (MoU) for the project was signed in July 2012 – just as Syria’s civil war was spreading to Damascus and Aleppo – and earlier this year Iraq signed a framework agreement for construction of the gas pipelines.

The Iran-Iraq-Syria pipeline plan was a “direct slap in the face” to Qatar’s plans. No wonder Saudi Prince Bandar bin Sultan, in a failed attempt to bribe Russia to switch sides, told President Vladmir Putin that “whatever regime comes after” Assad, it will be “completely” in Saudi Arabia’s hands and will “not sign any agreement allowing any Gulf country to transport its gas across Syria to Europe and compete with Russian gas exports”, according to diplomatic sources. When Putin refused, the Prince vowed military action.

What is beyond doubt is that Assad is a war criminal whose government deserves to be overthrown. The question is by whom, and for what interests?

I do not vouch for the accuracy of this story. For all I know it may just be one man’s tinfoil hat conspiracy theory. On the other hand, this is not my first rodeo either.

You really didn’t think that Barack Obama was suddenly overwhelmed by the emotional impact of seeing the bodies of some dead women and children did you? When is the last time the US government gave a shit about a humanitarian crisis in a country that doesn’t have oil?

We didn’t give a shit about Darfur. We let Somalia burn. We ignored the killing fields in Cambodia. After the Soviets left Afghanistan we turned a blind eye to the fate of women in the hands of the Taliban until after 9/11, then suddenly we were worried about their human rights again. For a little while, anyway. Then we quit caring again.

“Weapons of Mass Destruction” is the Mother of All Squirrels. There are 100,000 dead bodies in Syria and maybe 1% were killed with chemical weapons. And we’re gonna go to war for the 1%?

Here’s my thinking: If we’re gonna go to war over oil, let’s just go in and take all of it. Pump those Middle Eastern oil fields dry and then leave.

At least that way we would be honest about why we were doing it. And nobody would give a shit about that part of the world ever again.

I was born and raised in a different country - America. I don't know what this place is.
View all posts by Myiq2xu - BA, JD, FJB →
This entry was posted in Syria and tagged Syria. Bookmark the permalink.