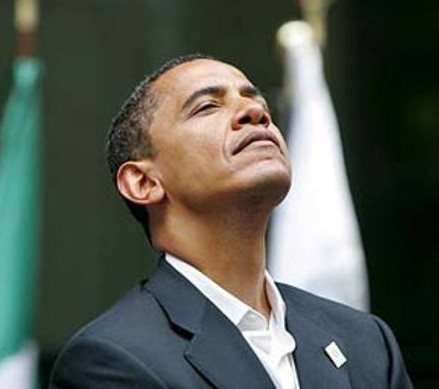 Peace In Our Time: Obama Caves to Putin, Assad, Iran

On Monday, the Obama administration, overcome by its own frantic confusion over a situation of its own making in Syria, fainted into the arms of Russian President Vladimir Putin – and, in the process, appeased the Syrian regime after Bashar al-Assad gassed some 1,429 people in Damascus last month.

In a London news conference on Monday, Secretary of State John Kerry suggested that Assad could avoid war by “turn[ing] over every single bit of his chemical weapons to the international community in the next week. Turn it over, all of it, without delay and allow a full and total accounting.” The Russian regime immediately responded to Kerry’s off-the-cuff remark – his second gaffe of the day, after he suggested an “unbelievably small” action against Syria as a deterrent — by suggesting that Syria turn over his chemical weapons to international control. Foreign minister Sergei Lavrov said, “We are calling on the Syrian authorities [to] not only agree on putting chemical weapons storages under international control but also for its further destruction and then joining the Organization for the Prohibition of Chemical Weapons…We have passed our offer to [Syrian Foreign Minister] Walid al-Moualem and hope to receive a fast and positive answer.” Moualem immediately responded that Syria “welcomes Russia’s initiative, based on the Syrian government’s care about the lives of our people and security of our country.”

President Obama desperately grasped the olive branch, stating, “You have to take it with a grain of salt, initially,” then adding, “We’re going to run this to ground. We’re going to make sure that we see how serious these proposals are.” The administration immediately claimed credit for this supposed diplomatic breakthrough, claiming that its threats had obviously been credible.

Thus, the Russians and Syrians have bartered a way out of Assad’s current predicament. Assad remains in power. His regime remains intact. He called the American bluff and won, and will be emboldened, as will his handlers in Tehran. The al-Qaeda opposition remains intact, too, perhaps slightly emboldened by Obama’s bluster. Putin seizes global leadership on foreign policy. Meanwhile, Obama claims victory, and his media lackeys genuflect before his brilliance.

If this Putin-brokered deal holds up then we will have avoided war. That is a good thing. Yeah, Assad will still be in power and there will still be civil war in Syria, but supposedly we weren’t aiming for regime change anyway.

Vladmir Putin comes out of this looking like statesman and peace-maker, and Barack Obama barely avoids a humiliating defeat in Congress. But there were no better options and the republic will survive. This was a “no-win” situation and for us to get out of it without losing is the best case scenario.

I’ll be honest and admit that I would have liked to see Barack Obama humbled and embarrassed. But we avoided a war, and I’ll take that over schadenfreude every day of the week. His sycophants can say whatever they want.

Obama got a face-saving exit opportunity so he can declare victory and go home. Now it remains to be seen if we can disengage from the crisis without further injury to anyone. This is still a delicate situation and all it might take is someone shooting off their mouth to cause some real shooting to take place.

There is no limit to what you can accomplish if you don’t care who gets the credit. – Ronald Reagan

I was born and raised in a different country - America. I don't know what this place is.
View all posts by Myiq2xu →
This entry was posted in Syria and tagged Syria. Bookmark the permalink.

38 Responses to Operation Save Face