Look, television networks, we really need to come to an understanding here. Just because someone has written a book—or more accurately, caused a book to be written in their name—does not mean that you are constitutionally obliged to put them on your television shows. Yes, professional famous person Sarah Palin has written a 10-years-too-late book grumbling about a supposed War on Christmas. No, this does not mean she will be any better at answering your questions about what the hell Sarah Palin stands for than she was during the last hundred appearances. She does not know.

So when Matt Lauer badgers Sarah Palin in a vain and pointless televised attempt to tease out whether or not Sarah Palin and her “tea party” have any suggestions for health care reform that do not revolve around the obsessive need to hurt Barack Obama, it should be no surprise that Sarah Palin launches into the usual word salad:

“The plan is to allow those things that had been proposed over many years to reform a health care system in America that certainly does need more help so that there’s more competition, there’s less tort reform threat, there’s less trajectory of the cost increases? And those plans have been proposed over and over again. And what thwarts those plans? It’s the far left. It’s President Obama and his supporters who will not allow the Republicans to usher in free market, patient-centered, doctor-patient relationship links to reform health care!”

All right, first off I think if we’re going to do this we need to first start with a whole show devoted to attempting to find out what Sarah Palin thinks the word “tort” means. The rest of that nonsense was lifted directly from a placemat.

But very well, let’s bite: So the “tea party” answer to Obamacare, according to its muse and Princess of the Roaming Bus Sarah Palin, is a mysterious plan that has been apparently been proposed before and therefore needs no further explanation, but revolves around “tort reform” and something-something to untrajectorify the increasificated costs because free market. Yes, thank you for that. I can see now why this person is considered one of the leading lights of far-right conservatism. Such genius. Such clear insight. Such a masterful ability to repeat words like tort because some backroom stiff at the Foundation for Screw You wrote it on one of his Powerpoint slides four decades ago and the word is still haunting conservative cupboards like an old holiday fruitcake.

In Sarah Palin’s defense, and merely writing that phrase will require a good mental scrubbing afterwards, this is not necessarily just the usual demonstration of Ex. Gov. Half-term’s legendary brickheadedness. The entire conservative movement, from Mitt Romney to Congress to local yahoos to top strategizing strategerists, has been unable to elucidate any plan any more detailed than Sarah Palin’s reference to a generic free market yada-yada with tort reform that magically reduces costs because the magical insurance fairies will then be set free to pass the savings on to you. She’s just reading the script she’s been given, she can’t help it if the writing sucks.

I’m not going to defend Sarah Palin because she doesn’t need my help. Yeah, she mangled an answer, but she was there to promote her new book, not announce a new health care reform plan. Last time I checked Sarah Palin was a private citizen. She holds no public office nor is she a candidate for one.

Meanwhile, Obamacare is an epic clusterfuck of historic proportion.

So what is the point of this diary?

It’s a big fat squirrel. “HA-HA! Republicans are stoopid! They don’t have a better plan anyway!”

I noticed it yesterday when Matt Lauer asked Sarah what the Tea Party alternative to Obamacare was. He asked her twice, even though he knows that the Tea Party is a grassroots movement rather than an organized group with a specific agenda or platform.

Where does it say you have to propose a specific alternative to Obamacare before you can criticize it? What’s wrong with “Repeal it now, start working on a new plan later?”

Obamacare is b-a-d bad. Tear it down and start over. And next time let’s do it right. Hold hearings on C-Span like Obama promised. Start with a discussion on exactly what the problems are that need fixing. Then start talking about solutions. 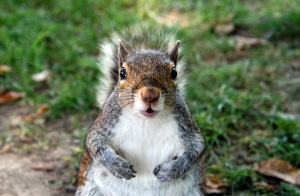 62 Responses to Cheetoville Chases a Squirrel