This May Be The Stupidest Thing I Read All Year 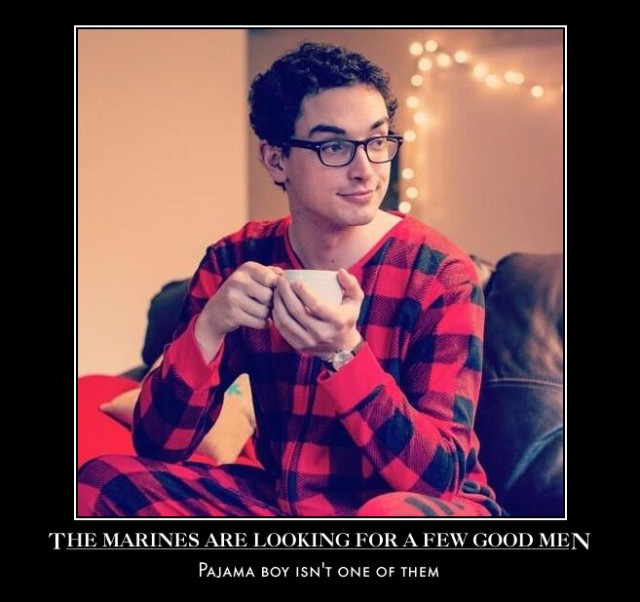 At Forward Mobile by Jay Michaelson (via David “Spoony” Atkins):

Surely the silliest kerfluffle of a political year that contained much silliness was the recent conservative hand-wringing over “Pajama Boy.”

Pajama Boy, you will be forgiven for not knowing, was the star of a recent ad — one among many — by “Organizing for Action” (formerly Obama for America) designed to get people to register for health insurance. This particular ad, part of the ‘Healthcare for the Holidays’ campaign was aimed at the twenty-something demographic, and advised said demographic to “Wear pajamas. Drink hot chocolate. Talk about getting health insurance.”

Interestingly — and seemingly overlooked in the ensuing media hubbub — the ad campaign’s actual purpose was to get those millennials to talk to their families about healthcare. The assumption being that twenty-somethings are more plugged-in than their parents to the details of the Affordable Care Act. Which they probably are.

But I digress. How could such a milquetoast political campaign attract so much vitriol? Well, demonstrating the three action-items of the campaign was a photograph of a young man, wearing pajamas, mug in hand, eyebrows raised, presumably ready to talk about health insurance.

Or glasses. What’s interesting about the Right’s freakout about men who don’t measure up to the standards of the 1950s is how Pajama Boy’s obvious Jewishness has been subsumed by these other characteristics.

Yes, Virginia, Pajama Boy is a member of the tribe. Look at him. Pale Ashkenazic skin, Jew-fro’d black curls, Woody Allen specs. Even the smart-ass expression on his face screams of the Wise Son from the Passover Seder.

Parenthetically, the model himself is one Ethan Krupp, an Organizing for America staffer who is, in fact, Jewish. But whether Krupp himself is circumcised or not, Pajama Boy is semiotically Jewish, even stereotypically so.

In fact, Pajama Boy stands at a centuries-old nexus of anti-Semitism and misogyny. As scholars including Sander Gilman and Daniel Boyarin have shown, Jewish men have been accused of being unmanly for hundreds of years – including by other Jews, such as the early Zionists, whose muscular Judaism was a direct response to diaspora Jewish emasculation. This is an old, old motif.

The Jew is the Other is the Effeminate is the Liberal. He is the urbanite, the parasite, the usurer, the lawyer. His effeminacy corrupts the Volk or the Heartland or the real American values. He wouldn’t know how to drive a pick-up truck if it was on cruise control. And he definitely votes for Obama.

Really, what’s “metrosexual” about Pajama Boy, anyway? The fact that he’s wearing pajamas? Drinking a hot beverage? No – it’s the way in which he so perfectly fits the Right’s image of the liberal Jewish girly-man. There’s a real “masculinity,” and then there’s whatever it is that Pajama Boy is embodying. (For the record, I have no idea whether Krupp is gay or straight. Neither do his haters.)

Needless to say, in this brave new world of Eric Cantor and the Republican Jewish Coalition (whose executive director makes over half a mil – must be a real man), the Jewishness of Pajama Boy is conspicuously absent from the vitriol. But as soon as you see it, you can’t un-see it. Which makes you wonder what the Review’s Charles Cooke – in another line conspicuously omitted by the discussions of this issue – meant when he said “the advertising machine behind the Obama administration seems not to really know what normal human beings are like.”

Normal human beings are gentiles. They spit or smoke tobacco, they speak plainly, and they are manly men who don’t wear pajamas, don’t raise their eyebrows, don’t support affordable healthcare, and definitely don’t flay their arms around like Woody Allen. Or Shylock. Real men. Not Jews.

Whether or not the Pajama-Boy bashers are unconsciously anti-Semitic or not, I don’t know. Consciously, they are against everything “Judaism” stands for, at least as construed by its enemies: outsiderness, cosmopolitanism, liberalism, a progressive rather than nativist agenda, an opposition to the notion that there is one kind of “normal” person, a sympathy for the underdog and the immigrant as opposed to the successful and the privileged, and, yes, a rejection of a certain gendered, masculinist understanding of justice wherein the strong survive and the weak are trampled underfoot like the untermenschen they are.

That fascistic outlook has long been a part of far-right conservatism – whether in revisionist Zionism, contemporary French/Hungarian/Greek nationalism, American Republicanism, or German fascism. Real men are strong, and the weak don’t deserve our pity. Let them get sick for lack of healthcare; they probably deserve it. And as for women, and the parasitic “Jewish” men who resemble them? They are to be suppressed and domesticated, not empowered. Patriarchy is good. Sexism is natural. Get out of your onesies, America. And put on your jackboots.

Those are Jay Michaelson’s words in all their glory. I published the whole thing under fair-use because I didn’t want anyone to think I was quoting him selectively to make him look bad or leaving out the part where he said “just kidding”. You can read more about the author here.

I remember way back to a week before Christmas when Pajama Boy first became news. My initial reaction was to wonder if it was real or a parody. (These days it’s hard to tell.) There was a lot of back and forth tweeting going about PJB, but I sure don’t recall any anger, at least not from the right.

There was laughter and gleeful mocking. Photoshops quickly appeared. It was lots of fun. This was at least one full day before the Duck Dynasty Debacle started and it was a slow news day, so of course it went viral.

I guess I was completely oblivious to Pajama Boy’s “obvious Jewishness.” I never crossed my mind that he was Jewish, or even that he wasn’t Jewish. I don’t think like that – my mind is colorblind. But even if he had been wearing a yarmulke or lighting a menorah I don’t see what difference it would have made.

Antisemitism is one of those isms that never made any sense to me. It’s more like a phobia – an irrational fear of circumcised men. I do understand that it exists, but most of the time I see it exhibited in this country it’s by Arab immigrants and left-leaning individuals and groups.

The far right and the far left both hate Israel and the Jews. But the mainstream right is supportive of both Israel and the Jews while the mainstream left has a large antisemitic contingent. There was plenty of antisemitism on display at Occupy Wall Street/OFA camp-outs. Our colleges and universities are strongly left-wing and they are also the home of the anti-Israel movement.

Ironically, most American Jews identify with the left and vote Democratic. Go figure.

You can safely bet that Michaelson did a Google and Twitter search for evidence of antisemitism, but he doesn’t cite a single example. That means he failed to find any. So the author comes up with a classic left-wing work-around for his lack of proof: “But as soon as you see it, you can’t un-see it.”