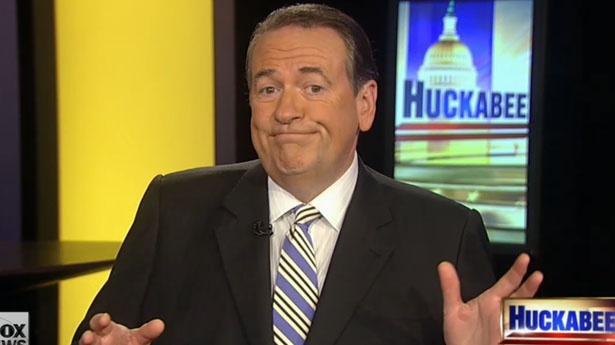 Mike Huckabee stepped into a pile of shit this week:

Huckabee was speaking at the Republican National Committee’s winter meeting Thursday when he remarked: “If the Democrats want to insult women by making them believe that they are helpless without Uncle Sugar coming in and providing for them a prescription each month for birth control because they cannot control their libido or their reproductive system without the help of the government, then so be it.”

But a number of reporters seemingly misquoted Huckabee. NBC’s Kasie Hunt, for instance, tweeting: “Huckabee: Women ‘helpless without Uncle Sugar coming in and providing them … birth control because they cannot control their libido.’” Though Hunt later clarified her tweet, Huckabee still made unflattering headlines at outlets like MSNBC and the Huffington Post.

Did you understand what Huckabee was saying? I’m no fan of the former governor, but I had no problem understanding him. It’s almost a run-on sentence with a really long subordinate clause, but it should be decipherable to anyone literate in English. He was not being sexist or denigrating women when he said it.

Nonetheless, it was a mistake for him to utter those words.

Any of those topics is a minefield, and these days it’s a sure thing that somebody will be watching and recording every word. One slip of the tongue, or just one quote that can be twisted and taken out of context, and BAM! – it’s Todd Akin all over again.

Even worse, there are Democratic operatives out there who will be trying to get unsuspecting Republican men to stumble with loaded questions. Even Republican women should be wary.

If you gotta say something, stick to carefully written and rehearsed phrases like Bill Clinton’s “safe, legal and rare” formulation. NEVER SPEAK OFF-THE-CUFF!

That is my professional advice. I always used to tell clients “You have the right to remain silent – use it! What you don’t say can’t be used against you.”

I can practically guarantee that before November more than one Republican candidate in this country will ignore my advice and suffer the consequences. I’m not saying it’s right, I’m just saying that’s the way it is.

“It is better to keep your mouth closed and let people think you are a fool than to open it and remove all doubt.” – Mark Twain

I was born and raised in a different country - America. I don't know what this place is.
View all posts by Myiq2xu - BA, JD, FJB →
This entry was posted in 2014 Elections, Sex and tagged 2014 Elections, Sex. Bookmark the permalink.

106 Responses to Don’t Talk About Sex