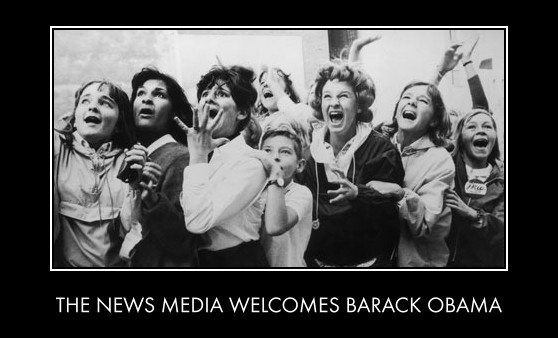 Seriously, I wish they would.

Ed Driscoll has another good article at PJ Media, titled “Say, Maybe TMZ Could Open Up a Branch in DC“. In it he first talks about the invasive and hostile coverage that Hollywood stars receive from the media. Then he says:

In the 1920s, H.L. Mencken wrote, “It is the prime function of a really first-rate newspaper to serve as a sort of permanent opposition in politics,” a notion that’s long since evaporated, as the New York Times and, to an only slightly lesser extent, the Washington Post effectively distribute press releases for the DNC and the Obama White House. See also Dave Weigel of Slate, and formerly of the Post, serving as a 21st century studio system fixer via his breezy dismissal of Democrat congressional candidate Alex Sink’s foot-in-mouth gaffe in which she said without immigrants — read: illegal immigrants — “where are you going to get people to work to clean our hotel rooms or do our landscaping?” Or the nightly news on CBSABCNBC ignoring the spectacular gaffe yesterday by Harry Reid, their fellow Democrat, that “there’s plenty of [Obamacare] horror stories being told. All of them are untrue.”

These days, if a rival news agency goes against the marching orders of the studio, sorry the White House, then they are cast out – they are not of The Body, to borrow one of James Lileks’ favorite Star Trek references. In the Ricochet podcast quoted above, after Rob Long pointed out the similarity between the White House press corps and show business reportage of the 1930s, Jonah Goldberg mentioned how NBC refused to name Alana Goodman or the Washington Free Beacon after their scoop on Hillary Clinton’s archives.

Washington is generally referred to as “show business for ugly people,” and as John McCain once quipped, “Hollywood is a Washington for the simpleminded.” But at some point, the DC press simply became, as Glenn Reynolds likes to call them, Democrat operatives with bylines.

Will journalists ever return to raking the muck in DC as aggressively as TMZ and other showbiz outlets cover Hollywood? Sure they will — just as soon as Republicans recapture the Senate and, especially, the White House.

Jennifer Lawrence may win her second Oscar this Sunday night. But win or lose, if she were to decide to go topless on a private yacht or isolated beach somewhere, there would be some member of the paparazzi nearby with a telephoto lens trying to snap a few pictures of her golden globes. If he succeeded, the pictures would be worth a small fortune and would soon be posted around the world.

Obama on the other hand can tell the media that “this is off the record” and then confess to murder and the media will guard his secrets. They won’t even ask him hard questions about important public issues at press conferences.

I could give fuck all about Justin Beiber’s latest misadventures. I don’t give a shit if Amanda Bynes and Lindsay Lohan are snorting cocaine off each other’s naked bodies. It makes no difference to me if Britney and Paris are wearing panties or not. I could live happily for the rest of my life without ever seeing or hearing Miley Cyrus again.

I would really like to know exactly where Obama was and what he was doing on the evening of September 11, 2012. I am very interested in seeing his college transcripts. There are several ongoing investigations into official malfeasance, misfeasance and all around misconduct and in each case I would like to find out exactly what Obama knew and when he knew it.

Unless President Donald J. Trump pulls a hat out of a rabbit real soon, on 1/21/21 I will wake up in a socialist banana republic.
View all posts by Dr. Myiq2xu →
This entry was posted in Media, Media Zombies and tagged Media, Media Zombies. Bookmark the permalink.