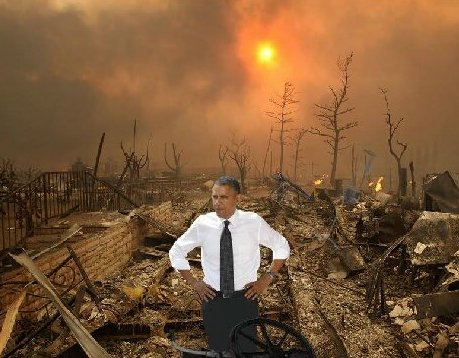 My work is done here.

FOR FIVE YEARS, President Obama has led a foreign policy based more on how he thinks the world should operate than on reality. It was a world in which “the tide of war is receding” and the United States could, without much risk, radically reduce the size of its armed forces. Other leaders, in this vision, would behave rationally and in the interest of their people and the world. Invasions, brute force, great-power games and shifting alliances — these were things of the past. Secretary of State John F. Kerry displayed this mindset on ABC’s “This Week” Sunday when he said, of Russia’s invasion of neighboring Ukraine, “It’s a 19th century act in the 21st century.”

That’s a nice thought, and we all know what he means. A country’s standing is no longer measured in throw-weight or battalions. The world is too interconnected to break into blocs. A small country that plugs into cyberspace can deliver more prosperity to its people (think Singapore or Estonia) than a giant with natural resources and standing armies.

The urge to pull back — to concentrate on what Mr. Obama calls “nation-building at home” — is nothing new, as former ambassador Stephen Sestanovich recounts in his illuminating history of U.S. foreign policy, “Maximalist.” There were similar retrenchments after the Korea and Vietnam wars and when the Soviet Union crumbled. But the United States discovered each time that the world became a more dangerous place without its leadership and that disorder in the world could threaten U.S. prosperity. Each period of retrenchment was followed by more active (though not always wiser) policy. Today Mr. Obama has plenty of company in his impulse, within both parties and as reflected by public opinion. But he’s also in part responsible for the national mood: If a president doesn’t make the case for global engagement, no one else effectively can.

The White House often responds by accusing critics of being warmongers who want American “boots on the ground” all over the world and have yet to learn the lessons of Iraq. So let’s stipulate: We don’t want U.S. troops in Syria, and we don’t want U.S. troops in Crimea. A great power can become overextended, and if its economy falters, so will its ability to lead. None of this is simple.

But it’s also true that, as long as some leaders play by what Mr. Kerry dismisses as 19th-century rules, the United States can’t pretend that the only game is in another arena altogether. Military strength, trustworthiness as an ally, staying power in difficult corners of the world such as Afghanistan — these still matter, much as we might wish they did not. While the United States has been retrenching, the tide of democracy in the world, which once seemed inexorable, has been receding. In the long run, that’s harmful to U.S. national security, too.

I wanna live in a fantasy world. A world with nothing but cold beer, warm beaches and hot babes. And pizza.

Unfortunately, I live in the real world.

There was a time when border were fluid. Countries routinely invaded each other, claiming land and resources. The European powers of Spain, England, France, Russia and even little old Portugal divvied up the New World amongst themselves. Over the years they traded these lands, fought over them, and occasionally sold them to each other.

They saw nothing strange about it because that was how the world was – the strong enslaved the weak. Colonial empires existed for the benefit of nations with the will and the power to exploit them.

Times changed. The world’s borders have become more or less stable. The old colonial empires are mostly gone. Most of the nations in the world at least pretend to be independent and self-governing. There is less war now than at any time in recorded history.

It’s that way because we made it that way. Without the United States, the current arrangement would not exist. We convinced the other major world powers to go along, and together with them we (mostly) forced the rest of the nations to cooperate.

We managed to stop nuclear proliferation, or at least slow it down. We got the world to agree to ban certain weapons of mass destruction, like chemical and biological weapons. We established the existence of international law. We even created something called the “United Nations” that was supposed to serve as a sort of world government.

It wasn’t easy. It took a lot of American effort. It took American muscle, American money, and American blood. But make no mistake, even though we have been less than perfect world citizens from time to time in our history, the world has been a lot better off since we became the big dog on the block.

Diplomacy works because it is backed by something more than just words. In a perfect world we would always work things out non-violently. But pacifism is a useless strategy when the other guy punches you in the nose.

Old school liberals like FDR, HST, JFK and LBJ were hard-nosed foreign policy hawks. They lived in the real world where if you talk the talk you better walk the walk too. They understood that if you want peace you have to be prepared for war.