This was supposed to be today’s morning post. By Forrest A. Nabors at Politico:

She Can See This Disaster From Her House

If Republicans lose the Alaska Senate race, they’ll have Sarah Palin to thank.

Deemocrats might long remember 2014 as the year when Sarah Palin won a place in their hearts. Four years ago, an endorsement by the former governor and vice-presidential contender vaulted Joe Miller from obscurity to Republican primary winner in the U.S. Senate race in Alaska, defeating incumbent Republican Sen. Lisa Murkowski. In the general election, Murkowski ran again as a write-in Republican, and won. Miller sank between the primary and the general election, helped along to his demise by eagerly reported news accounts of improprieties, including his security detail’s handcuffing of a journalist.

Although Miller narrowly lost his bid for the Senate, he parlayed Palin’s endorsement into national name recognition, what he calls a “top-ranked” Internet news site (“Restoring Liberty” at joemiller.us) and a small but intensely loyal local following—the kinds of people who are “looking for the Ted Cruzes, the Mike Lees, the Rand Pauls.” Miller is running again this year in the Republican primary for the right to oppose incumbent Sen. Mark Begich—one of the most endangered Democrats of the 2014 midterms and a key takedown target for Republicans.
Yet by an unusual arrangement of events, Miller is actually poised to seal Begich’s re-election, protect the Democrats’ Senate majority and prevent the repeal of Obamacare. And it’s all thanks to Sarah Palin.

Until this past year, when new chairman Peter Goldberg established calm, fratricidal bickering between Tea Party-style libertarians and everyone else has bedeviled the Alaskan Republican Party. Several chairmen have been ousted since 2010, and at one point the party leadership resembled the medieval papacy, with multiple claimants and no clear pope. The wounds from those intra-party fights are still fresh, and it’s not hard to imagine Miller launching an independent bid should he lose the primary, taking many of his Tea Party supporters with him. After all, “there’s a reason why the party bosses hate him and Washington fears him,” says the voiceover in one campaign ad. In the same clip, Miller says he is sending a message to “big-taxing, big-spending elites that the party is over.”

For the GOP, Miller’s run as an independent would likely be a disaster. In February, a Hays poll hypothetically pitted Begich, Sullivan and an independent Miller against each other (omitting Treadwell—a decision his campaign protested for “ignor[ing] the space-time continuum”), and found 45 percent for Begich, 33 percent for Sullivan and 10 percent for Miller—just enough to prevent a Republican victory.

Miller has been cagey about his plans. When prompted at a University of Alaska speaking event on April 10, he was careful neither to confirm nor deny a possible independent run in November, if he does not win the primary. But he did say that a vote for Treadwell or Sullivan would amount to a vote for Begich, and he did refer to good and “evil” Republicans.

Alaskans have not yet heard from Sarah Palin about Joe Miller’s candidacy this year, which is viable only because she endorsed him in 2010. But Miller, once left for dead on the political battlefield, is back in a big way. Incredible as it may seem, that endorsement is likely to haunt Republicans for years to come.

The original Politico title for this piece was “How Sarah Palin Ruined The Alaska Senate Race.” What I want to know is whether the author hurt himself stretching so ridiculously far to tie Sarah Palin into a hypothetical situation.

Lisa Murkowski (aka “Princess Lisa”) got her Senate seat the old fashioned way – her daddy gave it to her. He was the Senator and when he got elected as governor he appointed Princess Lisa to take his place. This was all before Sarah Palin defeated her daddy in the 2006 gubernatorial primary.

In 2010 Princess Lisa had to run for re-election, and she was defeated in the primary by Tea Party candidate Joe Miller. Backed by a informal coalition of Establishment Republicans and Democrats and funded with lots of out-of-state money, Princess Lisa ran in the general election as a “write-in Republican.” It was an ugly campaign, relying heavily on negative ads targeting Miller. He was thoroughly Palinized.

Princess Lisa won a plurality decision with 39% of the vote. Joe Miller got 35% and the Democrat candidate got 23%. Vox populi, vox Dei.

So now Miller is running again, hoping to win the GOP primary so he can face Mark Begich in November. He hasn’t said or done anything to indicate he would copy Princess Lisa and run as a write-in candidate if he loses the primary.

But the author (an assistant professor of political science at the University of Alaska in Anchorage) bases this whole two-page article on speculation that Miller will run as a write-in candidate and cost the GOP a possible victory and then he blames it all on Sarah Palin! 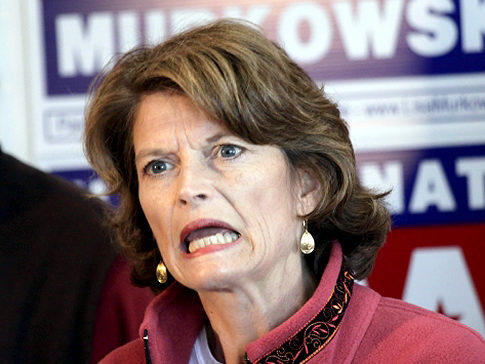 41 Responses to Don’t Hurt Yourself Stretching