Now, when I say PUMA was only a 2008 thing, that means that to ME, after the election was over, it lost its meaning as a resistance movement. The Democratic party lost me. I officially rescinded my membership in the party in 2008 and only re-registered as a Democrat in PA last year when I applied for a new driver’s license here in PA after my move. In PA, the primaries are closed so voters are forced to choose a party when they register to vote, unlike NJ where the semi-closed primary means you can choose a party on primary election day. I think anyone who reads my credo will see that I am a liberal New Deal style Democrat but my party affiliation, in spite of my registration, is very tenuous. In other words, if a third party came around that represented my views, I’d jump in an instant. Also note that I’m not a fan of the Greens and don’t particularly care for the crunchy type’s irrational condemnation of GMO crops, vaccines, pharmaceuticals, nuclear energy and corporations. I find some of the left to be as black and white in their thinking as the right and, frankly, I am losing patience debating the “religious” beliefs of both sides. I’m also not a selfish short sighted Libertarian. That’s where the rebels without a cause hang out. And you will never catch me voting for Republican ever again. My one vote for McCain in 2008 was purely a protest vote against the Democratic party because of its unethical treatment of its own party voters in 2008. It was not an expression of support for the Republican party or its cavalier, cruel, heartless, greedy, narcissistically malignant, lying, deceptive, destructive platform of “ideas”.

It was very upsetting to pull that lever and I will never forgive the Democratic party for pushing me to make that decision for a couple of important reasons. First, I was deprived of an identity and second, I was deprived of voting for the first African-American for president. But in my very important opinion, voting for the first ANYTHING was not a sufficient excuse to overlook or condone the party for rigging the primary and compromising what the party stood for. Some Democrats were able to overcome their moral resistance to what the party was asking them to do. I could not. That’s what made me a PUMA and also explains why PUMA lost its utility after the election. I felt that that what was required to fix what was broken was something bigger, more organized and longer lasting than a slogan. And then real life intervened and I couldn’t devote any time to it.

But PUMA did survive in another form on other blogs. I can’t endorse these other PUMA blogs. I have a sense that they were compromised by Tea Party and Republican operatives. There was an irrational embrace of birtherism and a weird support for Sarah Palin. This blog struggled with some of those holdouts for awhile until their presence got to be unbearable. These are the people that I think EJ Dionne is referring to in his post. What I think they have in common is their extreme anger at what happened to them in 2008. They were completely ignored by the Democrats who circular filed their votes and topped it off with a smug, “we’re smarter and know what’s best for you, you ignorant working class ‘gits” attitude.

Oh really? Those PUMAs who are still fuming on the Tea Party friendly blogs may not have Ivy League degrees or know someone who works in a “creative class” field but when it comes right down to it, the election of Barack Obama has done more to solidify the strangle hold of the oligarchs on the American public than any previous president we have ever had. We have actually devolved as a progressive nation. I will go so far as to say that Obama’s presidency has sped up that devolution. You could argue that Hillary Clinton wouldn’t have been different but my intuition (which hasn’t failed me yet in this whole mess) tells me that you would be wrong. In any case, when it comes right down to it, the “creative class” that got fooled into voting for Obama in 2008 and 2012 is no different from the working class voters it dismissed so senselessly. To the oligarchs, you might as well be living on a rice paddy in Bangladesh. Your ultimate fate is no different than the bitter gun toting church goers in rural Pennsylvania. You can be economically ruined and made politically impotent just as easily. That truth is just now dawning on you as you read The Divide and Piketty’s Capital and the latest study that says you don’t have enough money to make a dent in the lobbying shield wall of the 1%.

As for me, I don’t know if I would support Clinton in 2016. My sense is that so much has happened to fundamentally change the nature of our country in the past 20 years that there would have to be a personality much bigger and more visionary than Clinton’s to drag us back onto the right track. Could she do it? Maybe. But maybe she also recognizes the political landscape that she would be entering. I saw her evolve during the primary season. She was forged by fire and was gaining momentum when the party cut her off. That was a mistake the party made out of fear but it made it prematurely. By September of 2008, Elmer Fudd could have gotten elected as the first cartoon Democratic president, the situation was that dire. In a sense, the election of Barack Obama was not a triumph of identity politics as much as it was one of panic and desperation. But I have no doubt that under Hillary Clinton, there would have been more rehab and less codependence.

I like Riverdaughter. I really do. She gave me the opportunity to establish myself as a D-list blogger. She used to be an awesome writer; creative, original and prolific. I feel bad for her because I know she has really been put thru the ringer the past few years.

But there is no pity in the blogosphere.

When I read Riverdaughter’s posts these days I see someone who has lost her religion. Her whole world was shaken to the core by what happened in 2008. She was betrayed by the party she had devoted years of service to, and she was made a pariah and cast out of her original home at Dailykos. Then her career fell apart and she was laid-off.

I’ve been thru similar ringers a few times. It leaves you questioning everything you believe. Some people find themselves clinging bitterly to the flotsam and jetsam of their lives, trying futilely to put Humpty-Dumpty together again.

Not unlike some who have been abused by corrupt members of the clergy, Riverdaughter wants to believe that her religion is true and it was only the church that betrayed her. In her case the religion is liberalism.

That, I believe, is why she became so enamored with OWS. She went to Zuccotti Park and found a new temple to worship in. To the rest of us it looked like she had joined a cult. My analysis also explains her phobic reaction to Sarah Palin. To her, supporting Palin was like a Christian practicing witchcraft.

When my ideological world came apart in 2008 I chose a different path. Like all paths, you have to travel them to get anywhere. I let go of all my prejudices and preconceptions. I dissolved all my ties to any political parties. I tried looking at the world without anybody’s goggles filtering what I saw.

I took my beliefs out and inventoried them, tossing a few but keeping most of them. I started rebuilding with solid principles like honesty, liberty, freedom of speech and equality as a foundation. Only when the foundation is finished can you build the house. I’m still working on mine.

One of the things I have spent a lot of time contemplating is the proper role of government in an allegedly free democracy. We NEED some government, but how much and how to best organize it is the issue to be resolved. I have come to believe that big government is the antithesis of freedom.

A couple hundred and some years ago some guys back east who were a lot smarter than me concluded that the way to preserve freedom and yet maintain a unified society was something we call “limited government”. I think we really need to get back to the basics of the plan they came up with.

I have tentatively called this idea “small-government liberalism.” Take a lot of the power that has been accumulating in Washington DC and spread it back out among the states and local governments. Make the federal government the watchdog over civil rights and corruption at lower levels.

My idea is not completely fleshed out, and the working name I have given it has to go because of the bad connotations attached to the L-word. I will say that I think that government should get the hell out of the business of trying to manipulate/regulate the economy and private behavior. Simplify the tax codes and put an end to subsidies and other forms of crony capitalism.

One thing I am certain of is that government MUST live within its means.

Anyway, it’s late and I gotta go check on the cat. She likes to go outside at night. She never goes far from the back door, but I guess she has some nocturnal predator DNA in her and feels the need to stalk blades of grass and leaves and stuff. 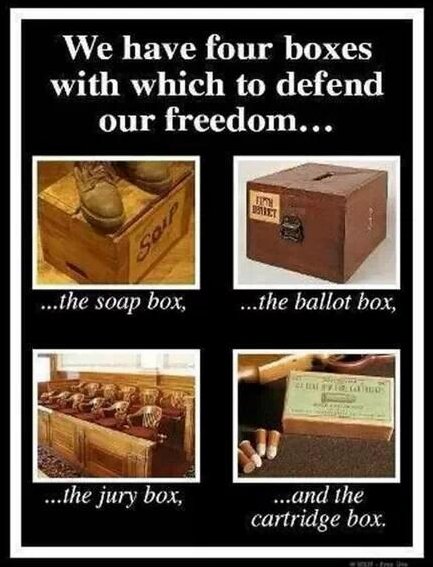 173 Responses to Party of One