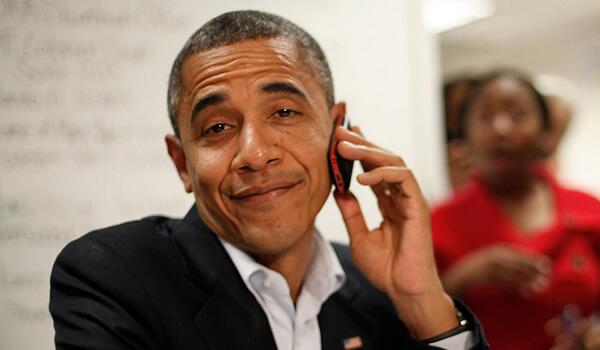 Are you fucking kidding me???

Obama, 6 Years In, Fights a Case of Cabin Fever

President Barack Obama seems to have caught a bad case of cabin fever.

Since taking office, Obama has periodically grumbled about the claustrophobia that sets in when his every move is surrounded by intense security, rendering it nearly impossible to enjoy the simple pleasures that private citizens take for granted. But in recent days, the president has made more of a point to get out.

“The bear is loose!” Obama declared this week after leaving the White House on foot, ditching his motorcade and his suit jacket in favor of fresh air as he headed to the Interior Department.

Tourists milling about near the White House were incredulous, never having expected to see the leader of the free world in the flesh on a steamy Wednesday afternoon. One woman squealed with delight; another suggested she thought it might be an Obama impostor.

Traditionally, whenever the president leaves the White House, he travels by motorcade or helicopter, insulating him from the sights around him in what’s colloquially referred to as “the bubble.” Before he arrives at his destination, Secret Service agents have already prepared layer upon layer of security that generally keeps Obama at a distance from anything unpredictable.

Life in the bubble can feel suffocating, as many presidents have attested. For Obama, relief frequently comes in the form of a weekend golf outing where, from the secure confines of a military base, he can at least look from left to right without his view being obscured by barricades, reporters or enough police officers to defend a small country.

But every once in a while, the golf course just doesn’t cut it.

“I don’t get a chance to take walks very often,” Obama quipped this week. “Secret Service gets a little stressed. But every once in a while I’m able to sneak off.”

Nearly six years into his presidency, Obama seems to be sneaking off just a bit more often.

Last week, diners at a Shake Shack near the White House looked up from their cheeseburgers to see Obama and Vice President Joe Biden stroll in to the restaurant, where Obama hoisted himself onto the counter and slid across as workers cheered him on. The White House said Obama was there to promote government-financed work projects and a proposed minimum wage increase, but the hastily arranged visit raised a few eyebrows.

Three days later, Obama was en route to a fundraiser in suburban Maryland when his motorcade made a detour. Pulling in to a local park, Obama popped in to a baseball field where a handful of Little League teams were getting ready for the big game. Smiling ear to ear, Obama lobbed a few balls toward home plate and posed for photos, his shirt and tie standing out among the sea of blue-and-white uniforms.

White House officials offered little explanation for the stop, other than to point out that Obama was scheduled later in the week to travel to Cooperstown, New York, to visit the National Baseball Hall of Fame and Museum. That visit, officials said, was aimed at promoting tourism to the U.S. as a way to boost the economy.

“And, no, this not just an excuse to go the Baseball Hall of Fame,” Obama’s senior adviser, Dan Pfeiffer, wrote in a blog post, seeking to pre-empt a critique the White House was apparently expecting.

Jeebus, talk about putting the “sick” in “sycophantic”! Is this what passes for investigative reporting at AP now? I realize that some people will say this is racist but Obama is the laziest POTUS in modern history.

Ever notice that whenever Obama acts “spontaneously” the White House photographer is always on hand to grab a couple flattering pictures?

Jim Wallis, a member of President Obama’s faith council, has a rule when he coaches the Tigers in the Northwest Washington Little League’s 10- to 12-year-old division: No talking politics with the influential Washington parents whose kids dot the rosters.

But he made an exception Monday evening when the leader of the free world showed up unexpectedly at Friendship Park in Northwest as the team was warming up. “Obama smiled and said, ‘Wallis! What are you doing here?’ ” Wallis recalled Tuesday.

Wallis, whose son Jack plays on the Tigers, had the same question for the president, who had made the unscheduled stop on the way to a Democratic fundraiser in Potomac. Why this park, on this day? The White House noted to traveling reporters that the president was mingling with the pint-sized sluggers to foreshadow his trip to Cooperstown, N.Y., home of the Major League Baseball Hall of Fame on Thursday, where he will discuss tourism and the administration’s efforts to ramp up foreign investment in the economy.

But Wallis suspected that there was another reason Obama stopped by — White House press secretary Jay Carney’s daughter, Della, 9, was playing in another game at the park at the same time with her team, the Royals.

In an interview, Carney said that it was pure coincidence that Obama turned up where his daughter was playing. He said the White House travel advance team had selected the field earlier in the week and he didn’t find out until staffers disclosed it in a planning meeting Monday morning. Carney said he didn’t even tell his wife, television journalist Claire Shipman, who was attending the game with their son, for fear of compromising the security around the secret presidential visit.

Uh-huh. Jay Carney wouldn’t lie to us, would he?

In case you missed it:

. . . the president, who had made the unscheduled stop on the way to a Democratic fundraiser . . .

That visit to Cooperstown? It was just a little pit stop on the way to a fundraiser in Chicago. A couple weeks ago Obama dropped by California to attend a bunch of fundraisers up and down the state. I’m sure he did something “official” while he was here so he could stick the taxpayers for the bill. The visit before that he gave a 20 minute speech over on the west side of the Central Valley on how global warming was causing our drought before flying down to Palm Springs to spend the weekend golfing at some fancy courses out in the desert that use massive amounts of water from the Colorado River to stay green.

I’m not sure what Obama will be doing this Memorial Day weekend but there is nothing listed on the White House schedule and since this is a holiday weekend and Washington DC is closed for business I seriously doubt he’ll be working. I’m gonna make a wild guess and say he’ll take MO and and the girls and the dogs and skedaddle off to some 1%er playground of the rich and shameless so he can get some much needed rest and relaxation from his grueling golf and fundraising schedule.

After the weekend is over there will only be a few days left until June. Obama will be busy as a beaver until the Fourth of July (which is on a Friday so it will be another 3-day weekend) and then he won’t have a minute of rest until his annual two-week vacation to Martha’s Vineyard. After Labor Day he’ll have his nose to the grindstone campaigning for the Democrats in Congress until November. I’m sure that somewhere in there he’ll make time to solve that VA non-scandal.

Okay, it’s been lovely but I’ve got to scream now.