I Guess Obama Gave Another Speech

In his address Wednesday to the graduating cadets at West Point , Mr. Obama marshaled a virtual corps of straw men, dismissing those who “say that every problem has a military solution,” who “think military intervention is the only way for America to avoid looking weak,” who favor putting “American troops into the middle of [Syria’s] increasingly sectarian civil war,” who propose “invading every country that harbors terrorist networks” and who think that “working through international institutions . . . or respecting international law is a sign of weakness.”

I honestly cannot stand to listen to the man speak anymore. Just the sound of his voice grates on my nerves and makes my blood pressure go up. I get irritated just reading a transcript of one of his speeches.

After outlining his vision for United States foreign policy to during his West Point commencement address on Wednesday morning, Barack Obama asserted, “This is American leadership. This is American strength.”

“In each case, we built coalitions to respond to a specific challenge. Now we need to do more to strengthen the institutions that can anticipate and prevent them from spreading,” Obama continued in reference to the United States handling of Iran, Syria and the ongoing conflict between Russia and Ukraine.

“For example, NATO is the strongest alliance the world has ever known. But we are now working with NATO allies to meet new missions – within Europe, where our Eastern allies must be reassured; and also beyond Europe’s borders, where our NATO allies must pull their weight to counter-terrorism, respond to failed states, and train a network of partners.”

Obama also declared, “I believe in American exceptionalism with every fiber of my being. But what makes us exceptional is not our ability to flout international norms and the rule of law; it’s our willingness to affirm them through our actions.”

President Obama added that he was not weak: “Of course, skeptics often downplay the effectiveness of multilateral action,’ he allowed. ‘For them, working through international institutions, or respecting international law, is a sign of weakness. I think they’re wrong.”

Yeah. Well . . . about that “leadership” thingie. If the past five+ years is what he calls leadership, then we better not step in it.

Seriously – does he honestly expect us to believe he planned all the foreign policy debacles we’re reeling from? We know he caused the mess, but did he really plan to screw everything up so bad?

I didn’t agree with George Bush on foreign policy either, but at least he seemed to have some kind of coherent strategery. Obama’s policy seems to be “I’m not Bush.”

I don’t claim to be an expert on geo-politics. It’s all I can do to keep up with domestic politics. But I can tell when something isn’t working, and the Obama-Clinton foreign policy has been a complete disaster. There is not one single bright spot anywhere. Everywhere that Obama has meddled he has made things worse.

Even his supporters aren’t buying his bullshit anymore. 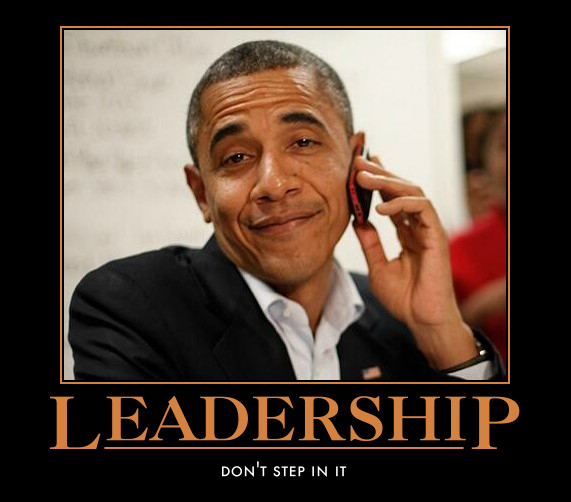 100 Responses to I Guess Obama Gave Another Speech