Everybody Needs to Chill Out 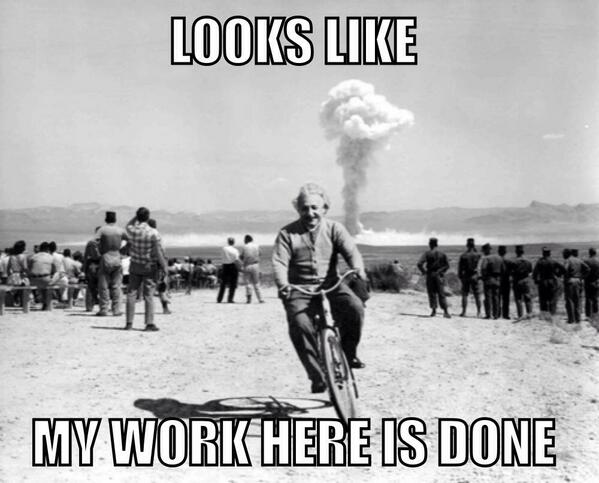 Welcome to July! As of today the month of June, the first half of 2014 and the most recent term of the U.S. Supreme Court are officially over. With a little luck from the baseball gods, the worst “June swoon” in SF Giants’ history will be over too.

As I’m sure you heard, SCOTUS handed down two decisions yesterday that caused quite a ruckus. The celebrations on the right were drowned out by the weeping, wailing and gnashing of teeth on the left. Most of the noise-making was over the second decision, but the first caused a few people to lose their shit too.

Everybody needs to chill the fuck out. The two cases yesterday are both small potatoes that are unlikely to make any major impact right away or in the future.

NBC News journalist Pete Williams, an accomplished reporter who is not prone to indulge in speculation, went out of his way to insist repeatedly that the Court’s decision in this case was a narrow one. He noted that the decision extends only to the specific religious objections a handful of employers raised about providing abortifacients (as opposed to contraceptives). Williams added that Justice Anthony Kennedy allowed in his concurring opinion that the federal government can pay for and provide that coverage if employers would not.

The Federalist published a variety of other observations about this ruling which indicate that it was narrowly tailored to this specific case. The Court ruled that Hobby Lobby and other employers could not simply drop health coverage in order to avoid mandates. This decision does not apply to other government mandates like those requiring employers cover vaccinations. Finally, if the will of the public in the form of an electoral mandate creates a groundswell of support for a government-funded program which provides access to abortifacients, then that would be perfectly constitutional.

Williams’ MSNBC colleagues nodded along and, when asked for their contribution, proceeded to display none of this NBC reporter’s caution.

“I think we’ve seen a real goal post-moving here,” MSNBC.com’s Irin Carmon said. “We may say it is a narrow ruling because Taco Bell and Wal-Mart can’t opt out, but it is still an enormous expansion of corporate rights and of the refusal from the laws that are passed to create benefits for everybody.”

“The larger doctrinal implication here is potentially significant,” MSNBC host Ari Melber agreed. “For the first time, the Court is going and taking the First Amendment rights that we’ve seen long established for certain corporate entities and extending them to the religious idea.”

“Just because it was only restricted to women’s health access doesn’t mean that it doesn’t create a devastating precedent which says that women’s health care should be treated differently,” Carmon added. She added that the Republican Party is the biggest beneficiary of today’s ruling. “So, the context of this is an all-out assault on access to contraception and access to other reproductive health care services.”

SCOTUS ruled that the Religious Freedom Restoration Act applied to Hobby Lobby. The RFRA was passed in 1993 with near unanimous votes in the Democrat-controlled House and Senate, then signed into law by Bill Clinton.

All yesterday’s decision did was say that a small number of companies in a narrow set of circumstances can invoke the First Amendment to avoid paying for a limited set of medications (commonly called “abortifacients”) that induce an abortion/miscarriage. Obamacare already provided an exception to paying for surgical abortions and the Hobby Lobby case just extended it to employers paying for drug-induced abortions.

“Morning-after” pills will still be available, but some women will have to pay for drugs themselves because they won’t be covered by Obamacare. The decision does not affect other contraceptives.

See? Nothing to get hysterical about.

The other case (Harris v. Quinn) could have been much more significant, but the Court kept the ruling’s application narrow.

The conservative majority on the Supreme Court on Monday signaled its distaste for state laws requiring public-sector workers to pay union dues — but stopped short of sweeping them away, handing organized labor a partial victory in a contentious case.

By a 5-4 vote, the justices ruled in Harris v. Quinn that home health care workers in Illinois cannot be compelled to financially support a union they don’t wish to join. Illinois is one of 26 states that require public-sector workers — such as firefighters, police officers and teachers — to pay partial dues, often known as “agency fees,” to the unions that negotiate their contracts and represent them in grievances, even if the employees find the union’s advocacy work distasteful.

Union leaders had feared that the justices might strike down those state laws as unconstitutional. The justices did not go that far. They issued a more narrow ruling that the home health care workers at issue in the case are not “full-fledged public employees” because they are hired and fired by individual patients and work in private homes, though they are paid in part by the state, via Medicaid.

Because they’re not truly state employees, the justices decided these workers did not have to pay union dues.
Even the fairly narrow ruling is a blow to the Service Employees International Union, the American Federation of Teachers and other unions that have organized hundreds of thousands of home health workers in states including Illinois, California and Connecticut. Those workers can now decide whether they want to support the union financially.

Calling them “workers” is misleading:

Pamela Harris is the primary caregiver for her 24-year-old son Josh. Josh suffers from a rare genetic condition called Rubinstein-Taybi syndrome, which causes severe intellectual and developmental disabilities. To offset the cost of Josh’s care and provide an alternative to institutionalization, the Harrises and other families in similar circumstances receive a modest stipend—about $2,100 per month—from the State of Illinois’s Disabilities Program for mentally disabled adults.[1]

Pursuant to a 2009 executive order by Governor Pat Quinn, Illinois regards Pamela Harris as an employee of the state—but only for purposes of collective bargaining.[2] State law provides the same for home-care workers who receive subsidies through its Rehabilitation Program, which covers other disabilities.[3] Under both programs, disabled participants or their guardians are responsible for developing plans of care and hiring and supervising their home-based caregivers.[4] Illinois law makes clear that home-care workers are not considered to be state workers for any purpose other than collective bargaining, “including but not limited to, purposes of vicarious liability in tort and purposes of statutory retirement or health insurance benefits.”[5]

Illinois has designated SEIU Healthcare Illinois & Indiana, an affiliate of the Service Employees International Union, as the exclusive representative for Rehabilitation Program caregivers in bargaining with the state over reimbursement rates. So far, Disabilities Program participants have turned back attempts by the SEIU and the American Federation of State, County, and Municipal Employees (AFSCME) to represent them before the state.

Illinois’s efforts to facilitate the unionization of home-care workers are not unique. Indeed, they are part of a decade-long campaign to organize home-based care workers, including medical assistants and even family child-care providers,[6] and thereby to “reinvigorate organized labor.”[7]

Pamela Harris did not want to join SEIU or pay them dues. No problem, the union just had the state deduct the dues from her monthly stipend. Yesterday, SCOTUS said that was a bridge too far.

The court could have extended its ruling to cover all government employees, but it didn’t. That’s what had public employee unions (and the Democrats who depend on their support) scared. But for now, in some states, public employees can still be forced to pay union dues.

In my opinion the cases handed down last week were more significant. But all in all, it was a pretty good month for the Constitution. Not so much for the current occupant of the White House.

127 Responses to Everybody Needs to Chill Out