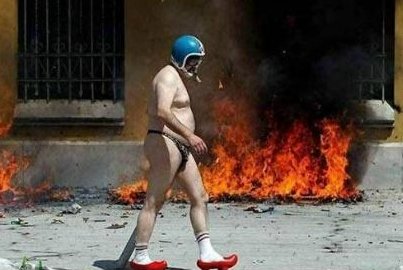 It’s Monday, so I’m picking the lowest hanging fruit on the internet. That’s right, it’s time for another segment of Whatchoo Talkin’ About, Willis?

Oliver Willis at the Daily Banter:

Fox News Channel launched in October of 1996. As a business and ratings enterprise, Fox News has been an unqualified success. Its ratings far surpass MSNBC and CNN, and while the bulk of its advertisers are targeting octogenarians (catheters, reverse mortgages and gold are its staples), it has been a financial success for Rupert Murdoch and News Corp.

But for conservative politics, Fox News has not done well at all.

Fox is a victim of its own success. Fox is the tip of the spear in the conservative media ecosphere. It creates the right wing storylines, gives them publicity, beats up on the mainstream media for not indulging in the same hyperbole, and rewards the Republican politicians who help them to whip up those storylines.

The problem for the conservative media is that the cycle is feasting on itself now. In the Clinton years, leading into the Bush era, Fox needed the mainstream press as it punched the left. When Fox was the underdog to CNN it could whine that CNN was setting the “liberal” agenda. But with Fox on top, the right has lulled itself into believing the “scandal” leading the O’Reilly Factor is on the lips of every American. But it isn’t. Fox is a conservative channel serving the needs of the conservative community, but its impact on mainstream American life is now severely limited.

In the recent past, I would have wanted Democrats and the left to have a cable news answer to Fox News. After watching the 2004 election, I honestly thought that was one of the only ways they would have an electoral shot. Luckily, I was wrong. Because while commentary on MSNBC does definitely lean left nowadays, it is not nearly as all-encompassing or devoted to party as Fox is to the GOP. This isn’t even putting into consideration MSNBC’s Morning Joe, which is hosted by a Gingrich Republican and is obsessed with the conventional wisdom and center-right nonsense from people like Mark Halperin and Harold Ford, who have little influence and gravitas outside of the media itself.

Fox News is great for its own ratings, for the pockets of Roger Ailes, Rupert Murdoch, Bill O’Reilly, and Sean Hannity, but it isn’t good for Republicans and conservatives, who are now slaves to this beast they must feed lest their constituents become restless.

Fox News will continue to dominate cable news ratings, and that’s great for Fox News. And little else.

First of all let me say that I’m not a fan of Fox News. I really don’t care for ANY television news because it tends to be “infotainment” with lots of sizzle and very little steak. If there is a plane crash I want to find out what happened, not listen to bloviating gasbags speculate without facts or watch interviews with distraught family members of the victims.

From its inception nearly 20 years ago Fox News carved out a niche for itself by presenting news and commentary from a right-wing point of view. They have never pretended otherwise. But Fox very much represents the GOP establishment, not the lunatic right fringe.

Almost from the first broadcast Fox has been a boogeyman for Democrats and the left-wing of American politics. Opposing Fox News is an obsession that has spawned a cottage industry of anti-Fox media, including MSNBC, The Daily Show, The Colbert Report, Media Matters, TPM, Mediaite, Salon and various lefty blogs.

I don’t watch Fox News, but usually read several stories about them every day, most of which were written by people like Oliver Willis. Ironically, right-wing blogs seem to spend far more of their time monitoring MSNBC than Fox.

While Fox News may dominate cable news, that’s like being the biggest frog in a small pond. And while it is an article of faith on the left that Fox News viewers are uncritical followers of Hannity and Bill O’Reilly, that’s just one of the many bogus caricatures that lefties believe about conservatives.

Yes, Fox News covers some stories that the rest of the media ignore. But that is an indictment of the the other news networks, not Fox News. The IRS targeting of Tea Party groups and the Benghazi cover-up are not a bogus scandals, no matter how much Oliver may wish it so.

The left-wing obsession with FOX News is revealing, because that is the one television news outlet that they don’t control. Notice that Oliver assumes that the primary purpose of the news media is to help advance a partisan agenda and candidates. That says a lot about Oliver and his employers at Media Matters and The Daily Banter.

Fox News is their Emmanuel Goldstein.

"In a time of universal deceit – telling the truth is a revolutionary act." – George Orwell

I was born and raised in a different country - America. I don't know what this place is.
View all posts by Myiq2xu - BA, JD, FJB →
This entry was posted in Propaganda and tagged Propaganda. Bookmark the permalink.